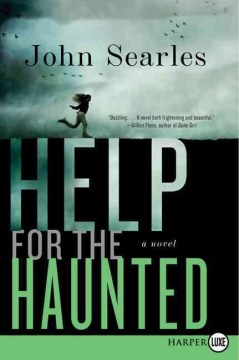 *Starred Review* The Masons were demonologists who advertised their services as help for the haunted. But the one who is truly haunted in Searles' third novel (following Strange but True, 2004) is their 14-year-old daughter, Sylvie, who witnessed her parents' murders in a church on a bitterly cold evening. Now, a year later, as the case is coming up for trial, she is under pressure from the police because the troubled client she ID'd as her parents' killer has produced an airtight alibi. Bullied at school and ignored by her older sister, who is now her legal guardian, supersmart, intrepid Sylvie is determined to figure out just what happened on that fateful night, and her search leads to some very surprising answers. Searles expertly manages his cleverly conceived plotline as he alternately withholds and doles out key information in tantalizing fashion. Amid the fascinating cast of characters, including her ne'er-do-well uncle, a kindhearted school counselor, and the specter of her supportive mother, is the unforgettable Sylvie. Somewhat geeky and blind to her own family's dynamics, Sylvie manages to figure out the hows and whys behind the catastrophic event that changed her life forever. Superlative storytelling. Copyright 2013 Booklist Reviews.

"No one makes eye contact or talks to me unless it is to taunt me about my parents and the things that happened to them—the thing that almost happened to me too…." Sylvie Mason and her sister, Rose, are left to fend for themselves after a fateful night that claims their parents' lives. A mysterious phone call is all it took to send her parents out in a blizzard, to a church from which they never returned. All that remains are questions, and Sylvie is determined to find out the truth even if it means going down to the scariest, darkest place in her house: the basement. VERDICT Searles (Boy Still Missing; Strange But True), has written a truly creepy, smart psychological thriller that will keep readers turning pages until the very end. Highly recommended. [See Prepub Alert, 3/18/13.]—Cynthia Price, Francis Marion Univ. Lib., Florence, SC

After Sylvie Mason's parents leave her in the car as they enter an isolated old church, gunshots sound, and Sylvie is left an orphan in the care of an older sister who might be implicated in their parents' death. With a 75,000-copy first printing.

Readers of this unsettling coming-of-age story from Searles (Strange but True) may feel the need to whistle past the graveyard by the end. Nothing has been the same for Sylvie Mason since the cold winter's night when her parents went to a deserted church, not in their self-proclaimed capacity as the saviors of haunted souls, but to meet their runaway older daughter, Rose. Left asleep in the car, Sylvie is awakened by the sound of the gunshots that ended her parents' lives. Nearly a year later, her grief is still fresh. Schoolmates taunt her, and though Rose has assumed legal responsibility for Sylvie, the older Mason girl fails to properly feed, clothe, or otherwise nurture her younger sister, all the while behaving erratically. Sylvie continues to lie to the police about Rose's whereabouts that fatal night, even as the trial of a man arrested for the crimes approaches. Her current existence, her parents' "gifts" and vagabond lifestyle, and strange goings-on in the Masons' basement unfold in nonlinear fashion, keeping the reader on edge while Sylvie bravely uncovers her family's many secrets. Agent: Joanna Pulcini, Joanna Pulcini Literary Management. (Sept.)