The smart one : a novel / Jennifer Close. 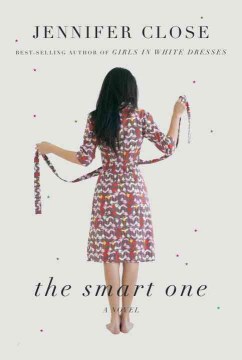 After watching her engagement fall apart, her job performance tank, and her credit-card balance rise into the stratosphere, Claire Coffey decides it's time to move back home. An old romantic flame even resurfaces, though Claire believes that being home for any meaningful length of time forces a regression to teenage behavior. While Claire, older sister Martha, younger brother Max, and the rest of the Coffey family try to navigate the logistics of having adult children return to the previously empty nest, they realize that no right answers can be found in any parenting manual. The Smart One focuses on the intersections of self-discovery, independence, and reliance in the modern family, all enlivened by Close's signature wit and warmth. Close does an admirable job of equally voicing the Coffey children, straining to reevaluate their priorities under a shared roof, and the Coffey parents, aching to provide guidance without wanting to seem heavy-handed. A touchingly tender, emotionally honest novel about shifting priorities and the nontraditional career paths so many find themselves on, this will appeal to fans of Jennifer Weiner and Laura Dave. Copyright 2012 Booklist Reviews.

Close's best-selling debut, Girls in White Dresses—about three young women dealing with job stress and uncertain love while everyone else is getting married—sounded suspiciously like a made-for-TV movie but was something else entirely. Once again, Close sets out to deal smartly with domestic crisis. Weezy and Will Coffey always tried to be the best of parents, so why is thin-skinned Martha back home in her childhood bedroom after a career crisis, Claire locked in her apartment after ditching her fiancé, and college senior Max in real girl trouble? From an author tracking upward.

Claire is nearing 30 and at a low point in her life. Her fiancé has just left her, and she has maxed out her credit cards to afford the apartment they rented together in New York City. Claire's only option is to move back home with her parents in Philadelphia, but she's not the first of her siblings to return to the family nest. Her socially challenged older sister, Martha, already lives there, and her younger brother, Max, is quick on their heels as unforeseen circumstances will soon find him living in the basement with his bride-to-be, Cleo. With a house full of adult children, parents Weezy and Will are left to wonder where they went wrong and when they might have an empty nest again. VERDICT Close's sophomore effort (after her acclaimed and best-selling Girls in White Dresses) is a well-written family drama in which all the characters keep moving forward, but not all loose ends are completely and neatly tied. This is sure to please fans of women's fiction dealing with family like the works of Jodi Picoult and Kristen Hannah. [See Prepub Alert, 10/8/12.]—Karen Core, Detroit P.L.

Near the end of Close's follow-up to her bestselling Girls in White Dresses, Claire thinks, "It was almost like she was right back where she'd started, but it didn't feel that way." For the reader, though, that's exactly how it feels. After ending her engagement, Claire sinks into depression, maxing out her credit cards and finally leaving New York for Philadelphia to move back in with her parents and sister, Martha, who's still working retail after a failed nursing career. Despite the finality of the breakup, Claire's mother continues to meet with caterers and florists to plan her daughter's wedding. How this will all end is clear when we first meet Claire and Martha; Close telegraphs that the way forward is to reclaim lost ground. What's surprising is that the sisters have so little fun along the way. Martha and Claire don't seem to have a genuinely kind impulse between them, and when they do finally move on, boredom is a big motivator. There are great stories to be told about families in "boomerang," but this isn't one of them. Agent: Sam Hiyate, the Rights Factory. (Apr. 5)