The heart broke in / James Meek. 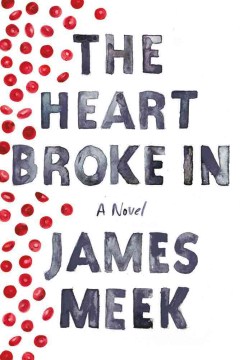 *Starred Review* Apparently a family man, rock icon turned TV producer Ritchie Shepherd has become careless in covering up his indiscretions, and it seems his most recent will go viral unless he pays a dear price to tabloid editor and self-appointed moral policeman Val Oatman. Ritchie's brilliant younger sister, Bec, with whom Val is in love, is in Africa, going blind after infecting herself with the parasite she discovered and that she believes is the answer to malaria inoculation. A long-ago bandmate of Ritchie's, genetic biologist Alex Comrie, thinks he'll finally realize his decades-old crush on Bec, while his dying uncle begs for some unconventional treatment and persuades Alex to take over his post as head of a London cancer research center. With bold characterizations throughout, Meek's latest novel offers wall-to-wall substance but remains accessible and grounded in earthy humanity. The story's thematic roots are revealed in the universal pursuit of youth versus the questionable finality of death; in how wisdom can sustain and knowledge, in wicked hands, destroy; and in the realization that treachery forges as many bonds as it breaks. Meek guides readers through these depths, past intersections of biology and morality, science and art, with beauty and deftness. Copyright 2012 Booklist Reviews.

Ondaatje Prize winner Meek (The People's Act of Love) once worked for the British newspapers—he was named Foreign Correspondent and Amnesty Journalist of the Year in 2004. So it's fitting that a main character in his new novel is powerhouse tabloid editor Val, who pretends to be the nation's voice of conscience even as he schemes to wreak revenge on obdurately honest Bec, who dared to break off their engagement.

This expansive and articulate British novel focuses largely on the romantic involvement of Rebecca (Bec) Shepherd, a brilliant, overworked biologist attempting to find a cure for malaria, and Alex Comrie, also brilliant, who researches cancer cures and aging. Bec's brother, Ritchie, an inveterate philanderer, hustler, and egomaniac. was once a huge pop star but now produces a British version of American Idol. When Bec breaks up with Val, the well-known editor of a scandal sheet that specializes in digging up dirt on pop stars, he seeks revenge by targeting her and anyone close to her in his paper. The most obvious target is Ritchie, who feverishly tries to cover up his lifestyle. Meanwhile, Bec and Alex have gotten together but face a personal problem that could jeopardize their relationship, compelling Bec to devise a scheme she hopes to keep a secret from Alex. VERDICT Though slightly laborious as the large plot winds down, this is a clever, observant, and absorbing novel as timely as the British tabloid scandals in the news right now. [See Prepub Alert, 4/9/12.]—Jim Coan, SUNY Coll. at Oneonta

At the heart of British writer Meek's seventh work of fiction (after We Are Now Beginning Our Descent) are brother and sister Ritchie, has-been pop-star, and Bec Shepherd, promising malaria researcher, whose father was killed by an IRA man when the Shepherds were just kids. Then there's Alex Comrie, former drummer in Ritchie's band, the Lazygods, now a gene therapist and reluctant heir to his brilliant Uncle Harry's cancer research institute. Val Oatman, editor of a tabloid newspaper, watches all of them until they become famous—or notorious—enough for him to take them down. Both Alex and Val fall in love with the beautiful, intelligent, and honest Bec, who's begun using herself as a guinea pig for her own research. In this novel, the Dickensian coincidences on which the plot often turns can stretch our present-day credulity, in part because they've fallen out of fashion in contemporary literary fiction, in part because the rest of Meek's novel is so bent on verisimilitude. Still, there is much to enjoy in this ambitious portrait of deeply human characters, grappling with how to live in the modern world, where science is capable of almost anything, including, as Alex's uncle hopes, immortality. Agent: Natasha Fairweather, AP Watt. (Oct. 2)

All we ever wantedGiffin, Emily

My sister, the serial killerBraithwaite, Oyinkan

What was mineRoss, Helen Klein

You should have knownKorelitz, Jean Hanff, 1961-

Only time will tellArcher, Jeffrey, 1940-