The girl who fell beneath Fairyland and led the revels there / by Catherynne M. Valente ; with illustrations by Ana Juan. 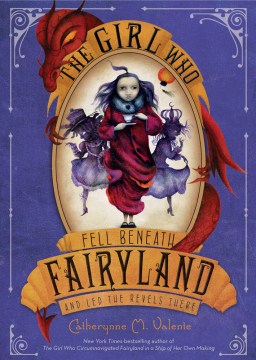 *Starred Review* In this stellar sequel to The Girl Who Circumnavigated Fairyland in a Ship of Her Own Making (2011), September is 13 years old and in possession of a teenage heart that is "raw and new, fast and fierce." It is this heart that guides her sophomore trip to Fairyland. When she literally stumbles into the magical realm, September finds that the inhabitants of Fairyland Above have been losing their shadows—sucked Below by the Alleyman, a floating red-feathered hat—and, along with them, their magic. As Fairyland Above becomes depleted, the underworld becomes a stronger, darker, increasingly renegade place under the rule of Halloween, September's shadow. Can September return the shadows and reset the equilibrium in Fairyland? On her quest, she's reunited with friends Saturday and Wyverary—well, their shadows at least—but mostly meets exciting new characters, from Belinda Cabbage, mad scientist, to a soft-spoken Physickist dodo bird named Aubergine. As with the previous title, Valente's inviting, lush, and densely detailed world is evocative of well-traveled lands, such as Neverland and Oz, but, at the same time, is uniquely its own. This is sure to draw new fans, but those familiar with the first book will find the reading a richer experience. Juan's shaded chapter-opening art puts bizarrely wonderful faces to names and sets just the right tone. Let's just hope the Green (or Silver) Wind calls us back to Fairyland soon. Copyright 2012 Booklist Reviews.

September's (The Girl Who Circumnavigated Fairyland in a Ship of Her Own Making) shadow, "Halloween," monarch of a liberated-shadow society in Fairyland's underside, plots to siphon away Fairyland's magic. September, along with shadow-versions of old friends and new companions, searches for the rightful heir to the throne. Valente again draws motifs from mythology, fairy tales, and Victorian fantasy to build an appealing world.

In a brief (but ominous) incident in The Girl Who Circumnavigated Fairyland in a Ship of Her Own Making (rev. 5/11), determined protagonist September sacrificed her shadow to save a young shape-shifter girl. Now September's sentient shadow -- known as "Halloween, the Hallow Queen, Princess of Doing What You Please" -- is monarch of a society of liberated shadows in Fairyland's dark underside. Because "it's no kind of life being [a] shadow," Halloween plots to siphon away Fairyland's magic for Fairyland-Below, end the oppression of shadows, and unite the two lands under her rule. September, along with uncanny shadow-versions of a few old friends and some new companions, searches for the rightful heir to the throne in order to depose Halloween and restore balance. But the distinction between one's self and one's shadow is no straightforward matter of light and dark; September faces the uncomfortable fact that she and Halloween are more similar than September would like to believe. As before, Valente draws motifs from mythology, fairy tales, and Victorian fantasy to build an astonishing, appealing world all her own. Juan's whimsical black-and-white spot illustrations ably capture outlandish Fairyland and its inhabitants. katie bircher Copyright 2012 Horn Book Magazine Reviews.