One good earl deserves a lover : the second rule of scoundrels / Sarah MacLean. 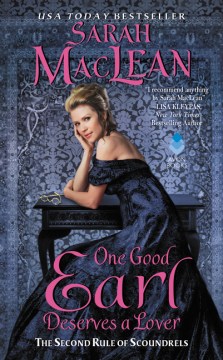 *Starred Review* When in doubt, seek out an expert. As a scientist, Philippa Marbury knows the value of consulting with an authority, so when Pippa needs a man skilled in the art of seduction, she tracks down England's most infamous rake: Mr. Cross. In two weeks, Pippa is scheduled to wed Lord Castleton, and she would like to learn more about what she can expect from her husband-to-be after the ceremony. Unfortunately for Pippa, Cross, part-owner of London's most exclusive gaming hall, not only is unwilling to share his legendary "skills" with Pippa; he also makes her promise him that she will not seek out similar advice from any other man. Of course, as a good scientist Pippa knows there is a time to play by the rules, and then there are times you just have to break them. With her usual clever writing style, superb flair for historical detail, and gift for subtle characterization, MacLean constructs the second scintillating installment in her Rule of Scoundrels series (A Rogue by Any Other Name, 2012). Completely captivating and exquisitely sensual, this is a tour de force of wit and romance. Copyright 2012 Booklist Reviews.

Brainy, bookish, bespectacled, and betrothed to a kindly but rather dimwitted earl, Lady Philippa Marbury knows all about anatomy and science but nothing about the physical side of marriage—and she only has 15 days to research it! What she needs is a research associate who's an expert on the subject, and from everything she's heard, tall, suave, wickedly charming Cross, a partner at her brother-in-law's gaming hell, the Fallen Angel, is the perfect person to ask. So she does—in one of the funniest and cleverest first-meeting scenes ever written. VERDICT Dark dealings, tragic secrets, and old vendettas temper the social glitter and add a realistic touch to this offbeat story that is seductive, witty, and charming as sin and nicely continues MacLean's compelling series. MacLean (A Rogue by Any Other Name) lives in Brooklyn.

Laughter and lust are delightfully intertwined in the sequel to A Rogue by Any Other Name. Pippa Marbury much prefers science to society, and with her wedding two weeks away, she decides to research wedding night activities. Not content to just read about sex, she wants direct experience, and naturally she turns to known rakehell Mr. Cross, one of the co-owners of London's notorious casino, the Fallen Angel. Despite being quite a scoundrel, he refuses to provide Pippa with the knowledge she desires; every time he turns her down, she just becomes more determined. Pippa is a remarkable heroine: smart, funny, beautiful, and genuine. The interactions between Pippa and Cross recall the great screwball romances and are enormously entertaining. Steamy sex and witty banter make for a highly enjoyable Regency romance. Agent: Alyssa Eisner Henkin, Trident Media Group. (Feb.)