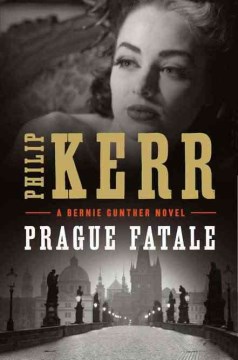 Previously, the novels in Kerr's celebrated Bernie Gunther series, starring the Berlin cop and reluctant SS draftee in WWII, have followed a strict chronology, though with numerous flashbacks to Bernie's glory years in the prewar period. This time, however, the forward motion is abandoned, even in the frame story, as Kerr jumps back to late 1941 to tell what, for most of the book, reads like a locked-room mystery. After being summoned to Prague to serve as bodyguard to Nazi Reichsprotector Reinhard Heydrich, Bernie is asked to solve the murder of one of Heydrich's adjutants, who was killed in his room, seemingly by a fellow Nazi. Structured like a P. D. James novel, the story follows Bernie, taking the Adam Dalgleish role, as he interviews a succession of Nazi toadies, moving toward a conclusion that Heydrich won't want to hear. Given its mostly constricted setting, the novel sacrifices some of the larger landscape—Germany before and during the war—that has driven the earlier volumes, but Kerr makes fine use of Heydrich as a character, leading up to his real-life assassination by Czech partisans. A subplot involving a femme fatale for whom Bernie falls hard effectively takes us out of the closed room but feels underutilized. There's much to savor here, but, finally, the novel is less compelling than its predecessors. HIGH-DEMAND BACKSTORY: The earlier Gunther novels were cult favorites, but as the fan base has grown dramatically, the series is now accorded full-metal marketing. Copyright 2012 Booklist Reviews.

Kerr's stellar eighth Bernie Gunther novel (after 2011's Field Gray) takes the Berlin cop to Prague in October 1941, to investigate the murder of an adjutant of feared SS Gen. Reinhard Heydrich, who's just become the Protector of Bohemia and Moravia. The morning after a drunken party attended by SS officers at Heydrich's country estate outside Prague, the adjutant, who was shaken by what he witnessed as part of a Nazi death squad in Latvia, is found dead in a locked guestroom. Heydrich wants Gunther, suicidal himself after similar experiences in Russia, to find the adjutant's killer fast, but how is one to identify the culprit amid a house full of professional murderers? A subplot involving the death of a foreigner run over by a train and Czech nationalists dovetails with a surprising denouement worthy of Agatha Christie. Kerr effectively works dark humor into Gunther's weary narration, and the ending packs the wicked bite his readers have come to anticipate. Agent: Caradoc King, A.P. Watt. (Apr.)

The Golem of HollywoodKellerman, Jonathan