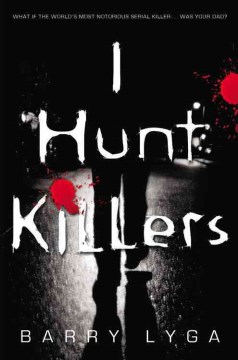 The Artist, Green Jack, Gentle Killer, Hand-in-Glove, Satan's Eye—all nicknames for Billy Dent, the killer who murdered 123 people before being incarcerated. For 17-year-old Jazz, the memories of his father's butcherous routine may be four years old, but they're all too fresh: his small-town community continues to treat him with suspicion at every turn. Then the murders begin again in the same order and fashion as Billy Dent's, and the town sheriff has no choice but to bring in Jazz to help find the new killer. Lyga has fashioned the kind of gripping, gory psycho-thriller usually relegated to adult fiction, one that fears neither viscera nor deviant sexual behavior nor the darkest of human impulses. It is rare when a YA novel dares to dwell upon the moral ambivalence of its protagonist, but Jazz is just that—a hero who constantly yearns to succumb to his killer instincts. Before the teasing finale, Lyga gifts readers with a Hannibal Lecter–like prison showdown between Jazz and Billy. Safe bet that the sequel will offer more of these satisfying tête-à-têtes. HIGH-DEMAND BACKSTORY: Warner Brothers has already snapped up TV rights to this big new series, which should compel the publisher to further crank up its already significant promotional plans and author tours. Copyright 2012 Booklist Reviews.

Four years ago, Jazz's father was convicted of over one hundred and twenty murders. Now Jazz hopes to stop whoever is re-creating those murders. Lyga explores compelling questions of nature, nurture, and free will in Jazz, who has more heart and conscience than he thinks. The biggest strength of this taut thriller is the engrossing mystery of the killer's identity--and what Jazz will do when he finds him.

Seventeen-year-old Jasper "Jazz" Dent's life changed irrevocably four years ago when his father was convicted of over one hundred and twenty murders. "For Dear Old Dad, Take Your Son to Work Day was year-round"; Billy taught Jazz tricks of the serial killer trade throughout his childhood. But when another killer strikes, Jazz hopes desperately that preventing more murders will prove to his small town (and himself) that he's not destined to follow in his father's bloody footsteps. He runs his own investigation alongside the official one and pieces together a pattern: the killer is doing a Billy Dent "impression" by re-creating his murders down to minute details. Though the characters are underdeveloped, Lyga explores compelling questions of nature, nurture, and free will in Jazz, who has more heart and conscience than he thinks. A wisecracking best friend, a compassionate girlfriend, and a father figure provided by the local sheriff anchor him and occasionally offer advice on "being human" to counterbalance Billy's macabre life lessons in violence and manipulation. The biggest strength of this taut thriller is the engrossing mystery of the Impressionist's identity -- and what Jazz will do when he finds him. katie bircher Copyright 2012 Horn Book Magazine Reviews.

The latest from crossover favorite Lyga (at the 2007 Day of Dialog, he told the audience, my fans are 15-year-old boys and women in their 30s and 40s) pits a teenage boy against a copycat killer in his home town. Jazz knows more than he should about serial killers; his dad ranks as the world's most notorious. Now, dad is in prison and Jazz is using his talents to help local law enforcement to find the Impressionist, whether they want him to or not. Jazz's likable personality contrasts sharply with his grisly upbringing‚ his father was open about his work, hoping Jazz would follow in his footsteps. The supporting characters and side stories ground the narrative: Jazz's grandma is battling dementia, his girlfriend wants an emotional commitment, and his best friend, Howie, provides comic relief. The book's blood-spattered exterior (with a first-class use of the book jacket) foreshadows its graphic subject matter. Whether you are cringing at its nastier bits or greedily turning the pages, this thriller will keep you up at night. Lyga's Mangaman (Houghton Mifflin, 2011, illustrated by Colleen Doran) plays on the differences between Western and manga-style comics. The former marketing manager for Diamond Comic Book Distributors will be part of the panel on Alternate Formats in teen literature. — "35 Going on 13" LJ Reviews 7/19/12 (c) Copyright 2011. Library Journals LLC, a wholly owned subsidiary of Media Source, Inc. No redistribution permitted.

Lyga continues to shift genres, delivering a superb mystery/thriller that explores what it's like to have a monster for a father. Seventeen-year-old Jazz's father, Billy Dent, was a prolific and brilliant serial killer who did his best to educate his son in the ways of murder. With Billy in prison for life, Jazz longs to overcome the stigma of his family history, but when a new serial killer strikes his small town, he is drawn into the investigation. Along with his hemophiliac best friend, Howie, and his girlfriend, Connie, Jazz applies the gruesome knowledge his father passed along in an attempt to discover the killer and overcome his fear that he might become a murderer himself. Lyga (Boy Toy) delivers a taut, gory tale that can easily stand on its own as an adult thriller, with a large group of suspects and plenty of red herrings. But it's Jazz's internal conflict about his exposure to his father's evil that adds extra dimension and makes the book shine. Additional books are planned, and TV rights have sold to Warner Bros. Ages 15–up. Agent: Kathleen Anderson, Anderson Literary Management. (Apr.)