The book of madness and cures : a novel / by Regina O'Melveny. 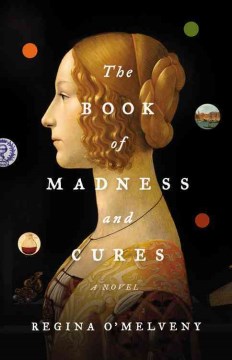 In O'Melveny's innovative, accomplished debut, a female doctor's travels throughout Renaissance Europe create a striking historical tableau, but the personal connections she makes en route provide the emotional drive. In 1590, Gabriella Mondini loses her physicians' guild membership due to her mentor-father's longtime absence and leaves Venice to find him. His previous letters provide clues to his location and mental state, which appears to be deteriorating. With her devoted servants, she treks across many lands, sharing medical lore with other scholars, suffering occasional losses, and learning about herself. The established religion—Protestant or Catholic—and treatment of women vary from place to place. A red-haired Scottish doctor becomes a kindred spirit and more, while some German villages remain eerily absent of females following a massive witch hunt. During the journey's initial stops, Gabriella comes across as rather distant; midway through, however, a surprising revelation shakes up her reserve and kicks the narrative into high gear. O'Melveny draws her scenes with vivid immediacy, opening readers' eyes to the mysteries and wonders surrounding them during this transformative time. HIGH-DEMAND BACKSTORY: The publisher is organizing a big publicity push for what it believes will be a breakout title for spring. It's a safe bet that the marketing effort, combined with the strong reviews the novel is bound to garner, will create plenty of reader interest. Copyright 2012 Booklist Reviews.

Like real-life Early Baroque painter Artemisia Gentileschi, affectingly portrayed in Susan Vreeland's The Passion of Artemisia, and Ariana Franklin's Adelia Aguilar (e.g., Mistress of the Art of Death), Gabriella Mondini is a woman ahead of her time. She's the lone female practicing medicine (with her father's sponsorship) in 16th-century Venice. Then her father vanishes, and she spends years traveling from Italy to Scotland to Morocco and more to find him, teased along by the occasional letter he's sent. In her fiction debut, poet O'Melveny draws on her Italian artist mother's memories of Venice and her own father's disappearance when she was young to create a story of real longing. A big push, with specially slipcased galleys featuring the beautiful cover. I'm betting on this one.

Poet O'Melveny's debut fiction is like a lyrical composite creature—part father/daughter epistolary novel, part aristocratic diary, part adventurer's travelogue, and part compendium of allegorical diseases. When 16th-century Venetian doctor Gabriella Mondini is barred from practicing medicine, she sets off across Europe in search of her father, a respected doctor who left under mysterious circumstances 10 years ago to gather material for his Book of Diseases. As a rare female doctor, Gabriella needs his mentorship, but his letters have grown increasingly incoherent; as she follows his route, she hears disturbing stories about his erratic behavior. Forced to cut off her distinctive red hair, she travels as a man through villages empty of women and girls after mass witch burnings. Her own adventures begin to rival the tales in her father's letters as she encounters suspicion, condescension, respect, and even romance. Gabriella's father continues to elude her, and she must face the possibility that she no longer knows where to find him. Yet she cannot resume her own life until she does. Gabriella's servants Olmina and Lorenzo accompany her and act as a pair of Sancho Panzas, providing mild salt-of-the-earth comic relief when not worn down by a yearning for home. By the time Gabriella reaches Morocco, where she believes her father to be, she too yearns for the comforts of Venice. But she has changed in ways that will greatly complicate her return. Readers will be delighted by O'Melveny's whimsical embellishments, though veterans of historical fiction may balk at the poetic, metaphor-laden prose and fancifully piebald construction. Maps. Agent: Daniel Lazar, Writers House. (Apr.)