A rogue by any other name / Sarah MacLean. 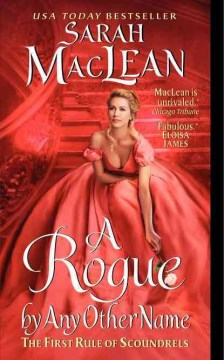 *Starred Review* Once the toast of the ton, Lady Penelope Marbury is now a source of despair for her family. Eight years after her engagement to the Duke of Leighton ended in disaster, Penelope has come to terms with spinsterhood, but her parents and her two younger, unwed sisters cannot accept her husbandless state, which is why Penelope's father, the Marquess of Needham and Dolby, has sweetened the deal by adding Falconwell to Penelope's dowry. For nine years, Michael Lawler, Marquess of Bourne, current owner of London's most notorious gaming hall, has been plotting a way to regain Falconwell. Now, just as Michael is poised to buy it back, he discovers that it comes with an unexpected feature, a new wife. If marrying Penelope is the cost of finally reclaiming his family's estate, it is a price Michael is more than willing to pay. Stunningly complex and compelling characters, a cleverly conceived and impeccably executed plot, intense passion, and sharp humor add up to a blissfully romantic literary treat that will have readers anxiously awaiting the second installment in MacLean's First Rule of Scoundrels series. Copyright 2012 Booklist Reviews.

Nine years ago, Michael Lawler, the young Marquess of Bourne, was lured into a reckless card game and lost everything but his title. Now, motivated by revenge and a wealthy part-owner of one of London's most notorious upscale gaming hells, Bourne has a chance to reclaim what he has lost—and nothing will stand in his way, not even marrying his childhood friend Lady Penelope Marbury. But marriage to the adventurous, courageous Penelope is not at all what he expects, and while their public "love match" begins as a lie, the ultimate results surprise them both. VERDICT Brilliantly crafted and deliciously seductive, MacLean's (Eleven Scandals To Start To Win a Duke's Heart) latest offering makes refreshing use of the vengeance theme, provides an enlightening view of the darker side of the London social scene, and beautifully sets the stage for the rest of the scoundrels in the series. MacLean lives in Brooklyn.

MacLean starts a new pre-Victorian series with enjoyable romps, witty banter, and electric sexual tension. Michael Lawler, the marquess of Bourne, lost everything in an ill-considered wager with a scheming neighbor. He spends 10 years recreating his fortune three times over by running the Fallen Angel, London's notorious gaming hell. Wealth hasn't stopped him from wanting to regain his family estate, and when the opportunity presents itself, Michael jumps at the chance, regardless of the strings attached—namely, marriage to his childhood friend Miss Penelope Marbury, the villain's daughter. Perpetuating a farce of a marriage for London society isn't difficult, but Bourne's all-consuming need for revenge endangers the possibility for real love between the two. The couple's buried insecurities become tiresome after a while, but the comic relief from feisty sisters and a marriage-minded mother pushes the reader onward. Agent: Alyssa Eisner Henkin, Trident Media Group. (Mar.)