Those across the river / Christopher Buehlman. 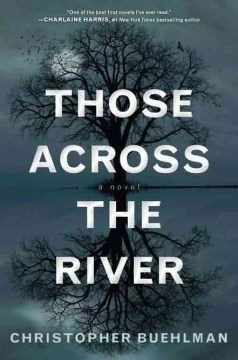 "Frank Nichols has plenty to run from. Memories of WWI trench warfare, though 17 years old, are still fresh. Fresher still are the professional wounds he's licking after the two-year affair that chased him and his young wife, Eudora, from the university at which both worked. The couple has landed in Whitbrow, Georgia, where Frank hopes to write a book about the infamous slave revolt against his plantation-owning great-grandfather. Impoverished little Whitbrow has a strange tradition of sending pigs, which they never see again, across the river for good luck. When they vote to end this tradition, all hell breaks loose. You see, those across the river need to eat, and if they can't eat pigs, they'll find something else. In its unnerving depiction of small-town creepiness and heathen savagery, this surefooted debut resembles nothing more than Thomas Tryon's Harvest Home (1973). It's so viscerally upsetting that it's a minor disappointment when supernatural elements are introduced. Nevertheless, this is lusty, snappy writing, and horror fans will eat it up (or vice versa)." Copyright 2011 Booklist Reviews.

College professor-turned-would be author Frank Nichols comes face to face with his past and a violent family secret when he inherits his family's old estate in the rural Southern town of Whitbrow. Although instructed to sell the house as soon as possible, Frank finds whispered stories of a slave-owning great grandfather who tortured his slaves for sport too compelling not to investigate. With his mistress, Dora, down-on-his-luck Frank moves south with plans to write about his family's history. After a town decision, influenced by Frank and Dora, to stop sending sacrificial pigs into the woods, strange and deadly things begin to happen. Something living in the woods wants the pigs to be sent and is making it known. When Frank has nothing left to lose, he starts to understand what it will take to overcome the thing in the woods. VERDICT Buehlman delivers a creepy, suspenseful, and well-crafted debut set in post-Depression era South. The action begins early and never lets up. Recommended for horror fans and those willing to be scared enough to want to stay out of the woods!—Amanda Scott, Cambridge Springs P.L., PA

Buehlman packs suspense and secrets into his debut novel, set in the deceptively quiet fictional town of Whitbrow, Ga., just after the Great Depression. When unemployed soldier Frank Nichols inherits a house from his last living relative, he ignores the disjointed note from his deceased aunt warning him away and moves in along with his girlfriend, Dora. At first, everything is idyllic, but as Frank uncovers strange superstitions concerning the woods across the river—the site of his great-grandfather's plantation—the mysterious inhabitants of those woods are starting to take notice of him. The era is vividly rendered, complete with Jim Crow laws, vigilante justice, and racial tensions. The elegant prose and heavy foreshadowing keep readers on their toes right up until the big reveal, but once the monster is out of the bag, the novel clumsily muscles its way to a formulaic finale. (Sept.)

Cry for the strangersSaul, John

Let me die in his footstepsRoy, Lori