Sorcerer's apprentice : an incredible journey into the world of India's Godmen / Tahir Shah. 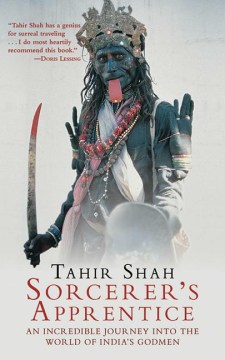 /*Starred Review*/ Shah's chronicle of the art of illusion as practiced in India, the land of myriad gods and miracles, is as astounding as the tricks performed by the crowd-thrilling "godmen" he so avidly describes. His fascination with magic began in boyhood when Hafiz Jan, a "giant bear of a man" connected to a noble Afghan ancestor of Shah's, visited his family in England and taught him his first tricks. Twenty years later, Shah, a witty and intrepid writer with a taste for the bizarre, ends up in Calcutta under the brutal tutelage of Hafiz Jan's former teacher, the inscrutable polymath Hakim Feroze. After an excruciating indoctrination, Shah is sent out on an ill-defined quest, during which, with the help of two unlikely guardian angels, Venky, a rickshaw driver, and Bhalu, a young con artist, he not only learns magicians' secrets but also comes to appreciate the incredible array of activities people perform to eke out a living, from selling skeletons to renting babies. Dazzled by the ingenuity and sizzle of India's many-layered society, Shah is by turns enrapturing and disquieting, droll and poignant, as he explores our need for magic and our endlessly inventive tricks of survival. ((Reviewed June 1 & 15, 2001)) Copyright 2001 Booklist Reviews

In this episodic journey into the magic of India, an apprentice of Indian magic explores the slippery nature of display, manners, and deception, debunking shaman trickery along the way. Growing up in England, Shah first learned about illusion from an Indian magician who cautioned him that, in his search for illusion, "seeking out the truth might be a slow uphill task." Some 20 years later, the author traveled to India in search of his teacher. Whether describing Calcutta, Varanasi, Bangalore, Sholapur, or Bombay, Shah celebrates India as a place one visits to search for "insider information" and observations of authenticity. Connections span from teacher to student, from The Guinness Book of Records to the scam du jour. Always entertaining and at times even funny, this catalog of characters reads like a hearty travel narrative; some parts even read like the early conversations of Oscar Wilde's The Picture of Dorian Gray. Highly recommended. Scott Hightower, Fordham Univ., New York Copyright 2001 Cahners Business Information.

The child of Afghan parents living in England, Shah (Beyond the Devil's Teeth: Journeys in Gondwanaland) first witnessed magic at age 11, when an Indian Pashtun named Hafiz Jan visited. Twenty years later, he travels to India to learn the magician's trade from the Pashtun. Hafiz Jan sends Shah to Calcutta to learn from his teacher, a magician named Hakim Feroze, who subjects his new apprentice to tortuous physical and mental exercises before casting him out into the streets to make note of whatever oddities he encounters. Shah learns trade secrets of hangmen and gold scroungers, eats in a restaurant that serves dishes prepared from refuse, visits a skeleton-processing factory, watches a psychic surgeon "operate." Then, accompanied by a 12-year-old scam artist he describes as "a walking crime wave," he travels through India meeting sages, sorcerers, astrologers, mystics, healers, miracle workers and other brokers of the supernatural, including a medium who reads fortunes in eyeballs, a chemist who turns drinking water into petrol and a guru named Sri Gobind who causes Easter eggs to emerge from his ear, candles to ignite spontaneously and flowers to bow to him. Unlike most magicians, Shah reveals the secrets chemicals, props, sleight-of-hand and dozens of tricks e.g., Sri Gobind's flowers perform thanks to chloroform and his symbols of "new life and purity" are Safeway's expired chocolate Easter eggs. Despite an unconvincingly tidy final twist, Shah's strange focus and vivid, lurid and amusing descriptions distinguish this travelogue from the crowd. Photos not seen by PW. (June) Copyright 2001 Cahners Business Information.