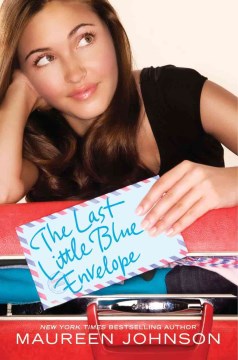 In 13 Little Blue Envelopes (2005), Ginny never finishes the European scavenger hunt, created by her late aunt Peg, which ends when her backpack is stolen in Greece. Now home in the U.S., Ginny gets an e-mail from Oliver in London, who claims to have the letter that will continue her hunt. Spontaneously, Ginny travels to England and connects with Oliver as well as her old flame, Keith, who surprises her with his new girlfriend. Once again, Johnson's legions of fans will happily follow Ginny's European adventures for the humor, realistic dialogue, and delicate journey through the grieving process. Copyright 2011 Booklist Reviews.

In this 13 Little Blue Envelopes sequel, Ginny goes on another European scavenger hunt--this time with a posse. As in 13, the setting is vivid and the situations are hilariously absurd. The group's dynamic is always authentic, usually funny, and occasionally heartrending. Johnson excels at conveying emotions through natural-sounding dialogue in this celebration of growing up, moving on, and embracing the unexpected. Copyright 2011 Horn Book Guide Reviews.

Readers who finished 13 Little Blue Envelopes and wondered what was in the thirteenth envelope finally have an answer -- and it's a good one. Five months after Ginny's late aunt's last letter was stolen from a beach in Greece, Ginny gets an e-mail from an English guy named Oliver, who's found the letter. Anxious for a break from college applications, Ginny regards the message as "the universe...demanding that she return to England...and finish what she had started" -- and okay, also see her "kind-of-something non-boyfriend" Keith again. The universe -- in the guise of the thirteenth letter -- responds by sending her on another multi-city European scavenger hunt. As in 13, the setting is vivid and the situations are hilariously absurd -- breaking into a Parisian cafŽ, sleeping in a Belgian cat shelter/hostel. But this time, Ginny has a posse: she's accompanied by Oliver, an extortionist (albeit a dashing one); Keith, alluring as ever; and Ellis, Keith's girlfriend, who, to Ginny's chagrin, is kind of nice. The group's dynamic is always authentic, usually funny, and occasionally heartrending; Johnson excels at conveying emotions through natural-sounding dialogue. New readers and old fans will find much to like, right down to the final life-altering kiss, in this celebration of growing up, moving on, and embracing (sometimes literally) the unexpected. rachel smith Copyright 2011 Horn Book Magazine Reviews.

In 13 Little Envelopes (2006), 17-year-old Ginny was sent on an all-expenses-paid scavenger hunt of sorts through Europe, via a series of envelopes from her late aunt. Johnson efficiently recaps the events of that book in a prologue (Ginny plans to use her European tour as fodder for her college application essay), before moving onto the plot point on which this sequel turns: the fact that Ginny never opened the final envelope—it was stolen before she had the chance. After a mysterious e-mail shows up in Ginny's inbox with a scan of partial contents of envelope 13, Ginny returns to Europe to find out what was in the rest of the note and carry out her aunt's last assignment. Johnson's prose is as fluid and assured as ever, and extortion, heartbreak, and a host of entertaining British boys all play their parts as Ginny and friends venture from London to Paris, Amsterdam, and Dublin. Readers who, like Ginny, are on the edge of adulthood, will be drawn in by this winning mix of globe-trotting adventure and romance. Ages 12–up. (May)