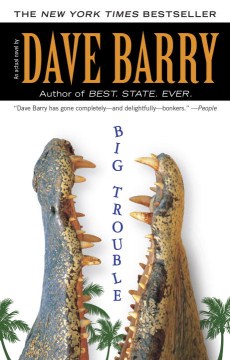 This first novel by the popular humor columnist won't fail to disappoint his numerous fans, and it may even garner new readers for him, because it's a delightful romp through the less noble side of Miami life. The story is character driven more than plot driven, yet it's a rousing good story nonetheless. Barry simply revels in his kooky characters, of which this novel is packed. You got a former newspaper reporter now small-potatoes advertising guy working out of a small office in Coconut Grove, chasing down what people owe him. You got two high school guys looking to "kill" a girl they go to school with, "killer" being a squirt-gun game big in school these days. You got an engineering and construction firm executive, stepfather of the girl the boys want to "kill," with two hoods from Jersey after him to kill him for real. And you got two street punks who actually believe they can extort on a major level, and what they get involved in is absconding with a bomb and hijacking a plane--sophisticated criminal stuff way beyond their mental means. And, too, you got great comic relief in, among other moments of great comedy, the dog Roger, whose whole life centers on trying to keep the big, bad old toad from eating out of his own bowl. These and other characters are what this novel boils down to: comic relief, a great source of diversion, and even chuckles. Hats off to Barry's cleverness. ((Reviewed August 1999)) Copyright 2000 Booklist Reviews

He's won a Pulitzer, written best-selling nonfiction, and had his life translated into a TV series. Now Barry makes his fiction debut with a rambunctious tale involving two hitmen who contend with a dysfunctional family in south Florida. Copyright 1999 Cahners Business Information.

Those who admire the comic gifts of humorist Barry will find their appreciation rewarded with his first venture into fiction writing. He has concocted an utterly screw-wacky farce set in Miami that involves a homeless man who takes up residence in an abandoned tree house; a foul-mouthed, spouse-abusing embezzler; a dumb-cluck advertising man; two plug-ugly hitmen; and a passel of assorted psychotics. It would be virtually impossible to try to outline the complex twists and turns of the plot, and the reader has to be pretty sharp not to get confused while Barry puts his characters through their several paces. But it becomes obvious that his hand is firmly on the throttle when the action slips into high gear. To reveal the climax would be unpardonable, but the novel ends with a bang. As usual with Barry, the narrative is shot through with keen, ironic humor and subtle mockery. Highly recommended. [Previewed in Prepub Alert, LJ 5/1/99.]AA.J. Anderson, GSLIS, Simmons Coll., Boston Copyright 1999 Cahners Business Information.

In writing a comic thriller set in South Florida, the Pulitzer-winning Miami Herald columnist and author of 20 books of satirical nonfiction (most recently, Dave Barry Turns 50) risks the inevitable comparison to Carl Hiaasen. The good news is that he acquits himself well in this slapstick caper. Barry's cast of familiar South Florida oddballs populate what might best be described as a Garry Trudeau (Doonesbury) sendup of the hard-boiled crime novels of Elmore Leonard. Featuring a homeless drifter who sleeps in a tree and tends bar for two illegal arms-dealing Russian hoods, a pair of two-bit losers who hustle tourists at parking meters, an ex-journalist (now a failing ad-man), a pretty illegal alien, a boozy embezzler and his ill-used wife and daughter, a teen with a water pistol playing a game of Killer, a retarded dog, a psychedelic South American toad, two klutzy New Jersey hit men and a virtual army of local and Federal law enforcement, the novel's quirky players bounce off each other like popcorn in a microwave, chasing after a mysterious suitcase containing a nuclear bomb in an unlikely race against certain death. The zany plot has more twists than the I-95 Miami airport interchange and more pratfalls than a Three Stooges comedy. Despite an occasional stiffness and tendency to strain for one-liners, the narrative moves at a breezy pace. Barry is indisputably one of the funniest humorists writing today, and his fiction debut will not disappoint a legion of fans. Agent, Al Hart. 150,000 first printing; $150,000 ad/promo; Literary Guild featured alternate; 12-city author tour. (Sept.) Copyright 1999 Cahners Business Information.