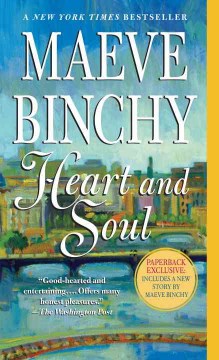 A Dublin hospital cardiac care center forms the figurative heart, and forges the symbolic soul, of Binchy s latest tour de force celebration of the simple blessings of a community whose joyous bonds are often eclipsed by the eccentricities of family and the improbable volatility of love. When Dr. Clara Casey becomes manager of the controversial and woefully unsupported outpatient clinic, she swiftly assembles a motley supporting staff of charismatic doctors, compassionate nurses, capable therapists, and clever assistants whose personal affairs of the heart are frequently more compelling and occasionally more cataclysmic than the physical infirmities presented by the actual patients. Whether it is a valiant young Polish girl on the lam from a ruinous love affair or a bumbling parish priest being pursued by a devious con artist, no one—least of all Clara herself—is immune from getting caught up in one of the daily mini-dramas that assail this dedicated group. Interweaving the domestic narratives of a dissimilar collection of individuals is beloved Binchy s stock-in-trade, and once again, she does so with sublime ease, inventively engaging readers through a reassuring and persuasive combination of gracious warmth, gentle humor, and genuine affection. Copyright 2008 Booklist Reviews.

The newly hired director of a cardiac-care center, Dr. Clara Casey is a strong character, who with great humor and panache manages life as a female medical professional and the single mother of two daughters. Crossing paths in the clinic or via clinic staff are Nora and Aidan Dunne, Father Bryan Flynn, Tom and Cathy Feather, and twins Simon and Maud, among others from various earlier Binchy novels (e.g., Evening Class). In keeping with tradition, several important dinners take place at Quentins restaurant. A nurse in Clara's clinic, Fiona Ryan has rebounded from the disastrous relationship portrayed in Nights of Rain and Stars, and a hard-working Polish immigrant named Ania overcomes her past and blossoms in her adopted country. The novel ranges far and wide, following some recurring characters to Greece, and it is always a comfort to catch up with familiar faces and meet new friends. Binchy fills the book with people finding true love, discovering their niche in life, and taking full advantage of second chances. Binchy's numerous fans will seek this out. [See Prepub Alert, LJ 10/1/08.]—Beth Lindsay, Washington State Univ. Libs., Pullman

Binchy delivers another delightful Binchyesque amalgamation of intersecting lives, this time centering on Clara Casey, a cardiologist whose marriage and career have fallen apart. After she accepts an undesirable post at St. Brigid's Hospital, Clara throws herself into work to forget the humiliation of her husband's many affairs, but it's difficult to escape her home life with two adult daughters who still depend on her as if they were children. Though she stands at the center of the book, Clara cedes the stage to others, such as Declan Carroll, a young doctor at the clinic trying to make a life for himself, and Ania, Clara's assistant, whose affair with a married man forced her to leave her Polish hometown. Beautiful, hardworking and humble, Ania attracts the attention of Carl Walsh, the son of one of the clinic's patients. And so it goes in this novel of intersecting lives that keeps daily drama interesting even when it occasionally sacrifices suspense for realism. In spite of a few dull moments, the collective, charming effect of these story lines suggests that individuals are more connected than they might think. (Mar.)

The language of flowersDiffenbaugh, Vanessa

The year of pleasuresBerg, Elizabeth
The library of lost and foundPatrick, Phaedra

The bookshop on the shoreColgan, Jenny

The library at the edge of the worldHayes-McCoy, Felicity