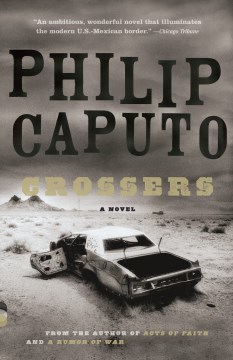 Caputo has written with feeling and intelligence about people and issues in settings ranging from Vietnam to Sudan. In this rich, affecting portrait of the U.S.-Mexico border, Gil Castle, a "Wall Street middle shot" made a widower by the 9/11 attacks, decides to start anew on an Arizona ranch run by distant family. He is helped out of his profound grief by Tessa, a neighbor dreading her daughter's deployment in the impending invasion of Iraq, and by his discovery of a half-dead border crosser, whom he haltingly befriends. Castle begins to perceive the complex and dangerous nature of the beautiful borderlands, but he doesn't know the half of it: readers also meet a criminal with multiple identities and allegiances; the hotheaded head of a drug cartel; and even Castle's grandfather, who fought in the Mexican Revolution but died reviled by Mexicans. As the ranchers struggle to cope with growing traffic through their land, and as the cartel boss plots to reclaim the ranch for her family, Caputo explores the ruthless complexities of border ethics. Ties to 9/11, though persistent and provocative, aren't strong enough to call this a "9/11 novel," though it's instructive how much one ongoing cultural clash informs another. And if this sprawling, ambitious novel isn't neat enough for some, we'll close with a quote from Caputo's main character: "Life isn't talk radio," says Castle. "It's okay to be ambivalent." Copyright 2009 Booklist Reviews.

Having lost his wife in the 9/11 attacks, Gil Castle tries to start over by returning to his family's Arizona ranch. But he can't escape his family's past or present tensions along the border. Once more, the excellent Caputo is set to turn the topical into art. With a six-city tour, but why no reading group guide? Copyright 2009 Reed Business Information.

Having lost his wife-and himself-on 9/11, Gil Castle finally leaves his high-power job, sells his home, and heads across country with his dog to stay in a small, primitive shack on the Arizona ranch of relatives he hardly knows. Soon after rescuing a Mexican man who wanted only to get to America but got trapped in a nasty drug deal, Gil is forced to consider the moral issues surrounding the border crossing of both drug runners and desperate illegals. What he doesn't know will soon hurt him: a woman who masterminds a drug cartel across the border is planning to wreak vengeance on his family for a past offense. Scrupulous and practiced journalist that he is, Caputo considers the issue of illegal immigration in balanced and thoroughgoing detail. Woven into Gil's story is an intriguing account of his grandfather, a real rough rider of a man who killed a horse thief at 13, fought with the revolutionaries in Mexico's civil war, and represents the complex mix of all that's strong-minded and maybe dangerous in the American spirit. VERDICT Readers of Caputo's Acts of Faith will be hoping for the same measured, masterly storytelling, informed by sociopolitical concerns, and they won't be disappointed. Highly recommended. [See Prepub Alert, LJ 6/1/09.]-Barbara Hoffert, Library Journal

The fallout between public and private distinctions of war is just one of the border disputes haunting Pulitzer-winner Caputo's gorgeously stark latest. Inconsolable after the loss of his wife on 9/11, Gil Castle leaves New York for his family's Arizona ranch, San Ignacio, overlooking the Mexican border. But San Ignacio proves to be "a pretty place where some ugly things happen," and Gil's discovery of a Mexican illegal, left for dead after a border-crossing deal gone awry, soon merges "the world of cattle and horses and operatic landscapes" with the "world of drug lords and coyotes and murder," whose cast of femmes fatale and tough muchachos includes the Professor—an "agent of history" working both sides of the border and at least two sides of the law—and Yvonne Menndez, the ruthless leader of the Agua Prieta cartel, whose past may be painfully entwined with Gil's family history. That history is broadly personified in Gil's larger-than-life grandfather Ben Erskine, a legendary deputy sheriff whose adventures emerge in inter-chapter accounts. At first glance, this multifarious book skirts country familiar to readers of McCarthy or McMurtry, but Caputo's west supersedes elemental cowboys and lone justice with the malaise of post-9/11 America and the violence of the Mexican desert—as gruesome as in Iraq—frothing with moral ambiguity and fraught with complicity. (Oct.)