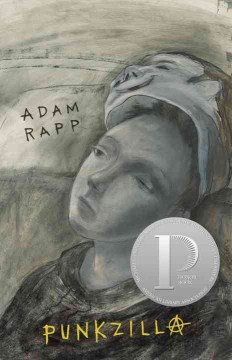 *Starred Review* The 61-word run-on sentence on the first page sets the stream-of-consciousness tone, and then two pages later there's hand jobs and meth—yep, it's a Rapp novel, all right. And the quality hits the high standards of 33 Snowfish (2003) and Under the Wolf, Under the Dog (2004). Fourteen-year-old Jamie (aka "Punkzilla") has gone AWOL from his military school, is off his meds, and is making his way from Oregon to Memphis, where his older brother, Peter, is dying of cancer. Though he is thankful to leave behind his career as an iPod thief, life on the road doesn't seem much better: his fellow Greyhound riders are frightening, he gets jumped in a roadside restroom, and his androgynous features land him in increasingly disturbing situations. You expect such bleakness from Rapp, but it's the flashes of humor and optimism that exhilarate. Beneath a surface of disease, despair, and disfigurements, Rapp's road trip is populated with good souls who, despite their circumstances, make significant sacrifices to help Punkzilla. Rapp constructs the book as a series of unsent letters to Peter and punctuates them with correspondence, some old enough to be heartbreakingly out of date, that Punkzilla has received from friends and family. This is devastating stuff, but breathtaking, too. Copyright 2009 Booklist Reviews.

Nobody writes about the disposable, marginalized youth of America with the same sense of uncomfortable, voyeuristic fascination as Adam Rapp, though his novels, featuring characters ill-equipped to deal with life's problems, can feel gratuitously brutal. Still, with several years having passed since the publication of his last YA novel (Under the Wolf, Under the Dog, rev. 10/05), fans will be eager to read this new one-and with good reason. Rapp's quirky idiomatic expressions, striking word choices, and stream-of-consciousness prose style are ample evidence that his facility with language remains as impressive as ever, while his use of an epistolary format adds a degree of narrative sophistication. Fourteen-year-old Jamie feels a strong connection to his gay older brother (both of them black sheep in their family), and writes him a series of letters while traveling from Portland, Oregon, to Memphis for a visit. These are interspersed with earlier missives written to Jamie from various friends and relatives. Gradually, Jamie's history emerges: how he felt disconnected; how he ran away from military school; his time on the streets, the ennui punctuated by drugs and sex and crime; and finally his long, strange trip. That his brother is dying of cancer adds urgency (not to mention poignancy) to Jamie's race to beat the clock. Copyright 2009 Horn Book Magazine Reviews.

At 14, pot-smoking, DVD player-stealing Jamie is no angel (though his androgynous good looks get him plenty of attention). He is sent to military school, but soon goes AWOL, spending some rough months in Portland, Ore. (mugging joggers, trying meth), before heading to Memphis by Greyhound bus to visit his gay older brother, Peter, who is dying of cancer. Rapp (Under the Wolf, Under the Dog) tells the story through Jamie's unsent letters, with additional letters from relatives and friends giving more background and context. Jamie, who has ADD, details every step (being taken advantage of sexually, getting jumped, befriending a female-to-male transsexual, losing his virginity) in expletive-filled, stream-of-consciousness narration with insights into seedy roadside America ("I think that as a general rule lonely people give other lonely people money a lot") and his own situation. Whether Jamie will survive his bad luck and make it to Memphis in time gives the story tension, but while Jamie leaves much behind each day on the road, little is found. The teenager's singular voice and observations make for an immersive reading experience. Ages 14–up. (May)

The boy in the black suitReynolds, Jason

Aristotle and Dante discover the secrets of the universeSaenz, Benjamin Alire

This is the part where you laughHoffmeister, Peter Brown

We are the antsHutchinson, Shaun David

The last exit to normalHarmon, Michael B.