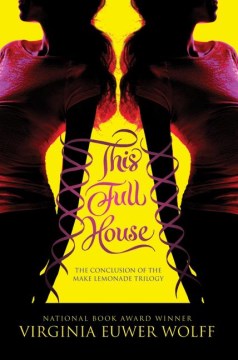 In this long-awaited sequel to True Believer (2001), winner of the National Book Award for Young People s Literature and a Michael L. Printz Honor Book, Wolff concludes her Make Lemonade trilogy. Now 17, LaVaughn continues to balance babysitting duties with school and her steadfast goal to get to college, away from the projects where she has grown up. After winning placement in a prestigious after-school science program, LaVaughn finds a new mentor in Dr. Moore, the program s founder. Studying exhaustively, she falls in love with science and plans a future in medicine, but she makes an astonishing discovery that threatens her future, her closest relationships, and her sense of self. The secret that anchors the plot is heavily contrived, a subplot about a pregnant teen (including a graphic birth scene) isn t always well integrated, and an authorial tone occasionally intrudes into LaVaughn s heartrending, free-verse narrative. As in the previous volumes, though, LaVaughn s ferocious determination and intelligence will wholly captivate readers, as will her beautifully articulated, elemental questions about integrity, faith, and how best to build a life. Copyright 2008 Booklist Reviews.

The long-awaited conclusion to Wolff's Make Lemonade Trilogy neatly ties up many of the loose ends of LaVaughn's compelling story. In the previous two verse novels, Make Lemonade (rev. 9/93) and True Believer (rev. 11/01), LaVaughn, with the help of her strong mother and inspirational teacher, stuck to her ambitious goal of someday attending college. In turn, LaVaughn helped struggling teenage mother Jolly find the strength and courage to turn her life around. Enter This Full House's Dr. Moore, the powerhouse who runs the medical science program for inner-city girls that LaVaughn attends. "You will memorize things / you think you cannot memorize, / ...You will find you can endure things / you thought you could not." The plethora of scientific facts Wolff provides, although excessive, serves to bring us inside LaVaughn's brain as she discovers her intellectual passion and the building blocks of her future. As Dr. Moore lectures, a familiar gesture and a smile "bright like glass" lead LaVaughn to suspect something incredible: Dr. Moore is Jolly's birthmother. This coincidence stretches credulity, but the consequences of the revelation return the story to palpable reality and the messiness of life. Dr. Moore's overtures to Jolly are met with all the fury of a child abandoned, and both women resent LaVaughn's interference. If the ultimate embrace between Jolly and her mother is somewhat unlikely, LaVaughn's own achievements, including her acceptance to college, are fully earned. Wolff's lyrical free verse once again breathes life into her unforgettable heroine. Copyright 2009 Horn Book Magazine Reviews.

Fans of Make Lemonade and True Believer have been eager for the final episode of this verse trilogy, to see where Wolff takes her protagonist, LaVaughn. For a while it seems as if LaVaughn's good heart and tenacity have been cleanly rewarded: she wins a spot in a highly selective program for underprivileged girls planning on careers in medical science. Although focused on her future, she remains acutely aware of others' struggles: her friend Annie gets pregnant; she learns that Jolly, the single mother whose children she babysits, was abandoned in infancy; and she regrets spurning brilliant Patrick ("And I never found out if he forgave me/ for being mean and childish and not noticing I was"). Even Dr. Moore, the inspiring woman who founded the medical science program, turns out to have a blistering secret in her past. Struggling to "act according to your conscience/ even when you don't want to," LaVaughn finds herself in murky ethical waters when Wolff contrives a very big coincidence for her to address. The steady, sympathetic characterizations more than compensate for the unlikely plot twist, however, and the trilogy closes warmly, sagely and, yes, even triumphantly. Ages 14–up. (Jan.)