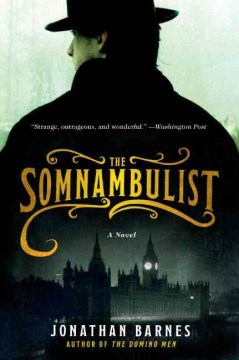 *Starred Review* First-novelist Barnes throws an Edwardian magician at a noir world of undercover agents, hard-boiled cops, and dystopian cults; gives his hero some colorful, circus-character cohorts and a golem/avatar protector; and manages to produce in the process a remarkably entertaining horror/mystery/historical/comic novel that fans of any of those genres won't want to miss. Edward Moon, conjurer and part-time detective, and his silent somnambulist (that's the golem protector) are called upon to investigate two bizarre murders. Instead of identifying a crazed killer, they unveil a meshed system of government corruption and an underground cult devoted to bringing London to its knees and establishing a pantisocracy—based on a utopian ideology created by poet Samuel Coleridge and his friend and fellow poet Robert Southey. An often nonsensical nightmare quality to the fast-paced action accentuates the characters' mystification as they plunge from fright to frightful in an effort to stem the gruesome and inexorable tide of evil. Like Poe—and likewise Lemony Snicket—Barnes begins his novel with a disclaimer about its lack of literary merit, and in some ways, he's right: underdeveloped characters and subplots, along with implausible and sometimes ridiculous premises do get in the way of all the energy. But not all that much. Barnes is up to something very special here. He's created a new genre, really, a graphic novel written in longhand, and it combines the subtle horror of Patricia Highsmith, the goofy gore of Christopher Moore, and the cartoon action of the TV series Heroes. Read for the sheer fun of it. Copyright 2007 Booklist Reviews.

Who is the Somnambulist? The character (like the novel) is festooned with layer upon layer of oddities. Not only is he a mute giant who is invulnerable to weapons and addicted to milk, but he also sleeps in a bunk bed, is completely bald, and glues a wig to his head every day. His partner, the magician and private detective Edward Moon, sleeps in the other bunk bed, dallies with bearded ladies of the evening, and has a mysterious past. In fact, nearly everyone in the turn-of-the-century Victorian London depicted here has a mysterious past, except for Mr. Cribb, who has a mysterious future because his life runs backward in time. Despite this, Barnes's literary debut doesn't come across as jokey or as an obvious parody—it takes itself seriously enough to be a compelling and entertaining read on its own merits. A reader of Edgar Allan Poe, Arthur Conan Doyle, and Wilkie Collins is likely to find plenty to wink at, but the story works on many levels. Highly recommended for public libraries.—Jenne Bergstrom, San Diego Cty. Lib.

Set in Victorian London, this superb debut from British author Barnes raises the bar for historical thrillers, starting with its curious opening line: "Be warned. This book has no literary merit whatsoever." A page-turner, it's full of peculiar characters, notably Edward Moon, a highly unorthodox detective, and Moon's bizarre sidekick, known only as the Somnambulist. Moon, "a conjuror by profession" whose act has fallen on hard times, has cracked some of the city's most notorious murders. Now, he's leading the investigation into a shadowy religious group aiming to overtake London and do away with its oppressive, bourgeois tendencies. Moon is a remarkable invention, a master of logic and harborer of all sorts of unnatural habits and mannerisms. The Somnambulist—a giant, milk-swigging mute—doesn't appear to be human at all, yet serves as Moon's moral as well as intellectual compass. Together, they wend their way through a London rich in period detail. Barnes saves his best surprise for the story's homestretch, when he reveals the identity of his narrator, who's been cleverly pulling strings since the opening. (Feb.)