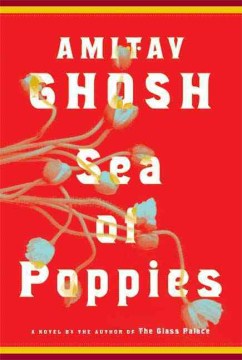 "A passion for history propels Ghosh's sweeping novels, in which love leaps the fences of race, caste, nationality, and class. After his complex tale of humankind's relationship with nature in The Hungry Tide (2005), Ghosh returns to the narrative grandeur of The Glass Palace (2001) in this lengthy yet fast-flowing historical novel about England's ruthlessly run opium industry in occupied India. It begins in a "sea of poppies" in Bengal, and culminates on board the Ibis, an old slave ship carrying a motley group of outcasts. There's brave Deeti, a young fugitive widow; dashing Zachary, the son of a former slave and her American master; adventurous Paulette, a French orphan; and Neel, a fallen raja. In vivid settings ranging from the hellish precincts of an enormous opium factory, to absurdly lavish upper-class households, to the Ibis' grim hold, Ghosh unfurls tales of betrayal and tyranny, revelation and transformation, while reveling in the mischievous inventiveness of a bawdy polyglot lingo favored by sailors on Eastern seas. With intimations of Dickens and Melville, Ghosh's vital saga encompasses suspense and satire, perverse cruelty and profound kindness, and the countless ways humans conceal desire and fear behind arrogance and brutality. More frolicsome language, penetrating insights, and high adventure will follow now that the Ibis trilogy is under way." Copyright 2008 Booklist Reviews.

Ship of fools? The folks aboard the Ibis, which is heading across the Indian Ocean to enter the Opium Wars, include an impoverished raja, a mulatto American, and a French orphan. With a reading group guide. Copyright 2008 Reed Business Information.

Deeti has a vision of the former slave ship long before she spies its sails billowing up the Ganges, intuiting that her fate will inexplicably be tied to this vessel. In fact, the Ibis represents a microcosm of the Middle East during the 19th century, carrying a crew of displaced pilgrims to resettlement in Mauritius, where their lives may no longer be circumscribed by caste, religion, or ancestry. Learning how these disparate characters—a Bengali widow, a French orphan, a deposed rajah, and an American freedman among them—come to be on the Ibis will require some fortitude from readers, who may be distracted by the author's fascination with word origins and liberal use of colloquial forms of speech. A prolific author, anthropologist, and past recipient of an ALA Notable Book Award, Ghosh (The Hungry Tide ) offers history buffs a devastating and well-researched look at the business of opium manufacturing, along with the politics that led to the Opium Wars between China and Great Britain. Unfortunately, this first entry in a proposed trilogy is uneven, trying to combine historical fiction with a comedy of manners, a maritime adventure, and a treatise on class/gender discrimination and ending abruptly with no resolution for those who may not want to wait for the sequel. For larger public library collections. [See Prepub Alert, LJ 6/15/08.]—Sally Bissell, Lee Cty. Lib. Syst., Ft. Myers, FL

Diaspora, myth and a fascinating language mashup propel the Rubik's cube of plots in Ghosh's picaresque epic of the voyage of the Ibis , a ship transporting Indian "girmitiyas" (coolies) to Mauritius in 1838. The first two-thirds of the book chronicles how the crew and the human cargo come to the vessel, now owned by rising opium merchant Benjamin Burnham. Mulatto second mate Zachary Reid, a 20-year-old of Lord Jim–like innocence, is passing for white and doesn't realize his secret is known to the "gomusta" (overseer) of the coolies, Baboo Nob Kissin, an educated Falstaffian figure who believes Zachary is the key to realizing his lifelong mission. Among the human cargo, there are three fugitives in disguise, two on the run from a vengeful family and one hoping to escape from Benjamin. Also on board is a formerly high caste raj who was brought down by Benjamin and is now on his way to a penal colony. The cast is marvelous and the plot majestically serpentine, but the real hero is the English language, which has rarely felt so alive and vibrant. (Oct.)

What the body remembersBaldwin, Shauna Singh

Do not say we have nothingThien, Madeleine, 1974-

The house of blue mangoesDavidar, David

The god of small thingsRoy, Arundhati

The lives of othersMukherjee, Neel