My sister, my love : the intimate story of Skyler Rampike / Joyce Carol Oates. 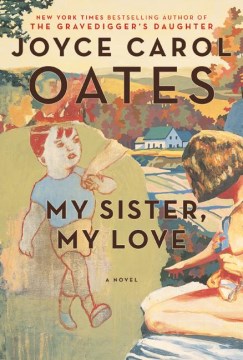 *Starred Review* Of course Oates, fluent in the valor and vulnerability of girls in our aggressively sexualized world, would be drawn to the unsolved murder of JonBenet Ramsey. But she is also imaginative and daring enough to fictionalize that horrendous case with ferocious intensity, nervy wit, and profound purpose. Bix Rampike, big, sexy, and ruthless, is intent on getting mega-rich. Anxious and needy Betsey Rampike longs to impress the elite in their snooty New Jersey town, and tries to use her jittery son, Skyler, as bait. But it's her second child, high-strung Edna Louise, who fulfills Betsey's dream via figure skating. Oates' choice of girls' exhibition ice-skating is inspired. It's a cold, hard, and precarious realm fraught with prurience. And her choice of narrator is equally ingenious: Skyler tells the story of his sister's grotesque and grueling transformation into Bliss, a provocatively costumed ice fairy, a decade after her death. He has barely survived his toxic family, and his chronicle of the Rampikes' erotically charged self-destruction becomes a mordantly satirical indictment of a deeply neurotic society, replete with its "Tabloid Hell" and "cybercesspoolspace." Damaged and incisive, Skyler is an utterly compelling narrator, and Oates is at once wrenchingly visceral and transcendently empathic in this bold and astute tragedy of fatal ambition. An unforgettable novel of extraordinary dimension and power. Copyright 2008 Booklist Reviews.

In 1999, Oates (The Gravedigger's Daughter ) wrote an article discussing and reviewing books on the JonBenet Ramsey case. Here, she fictionalizes the case to satirize upper-middle-class status seekers, media fixation, and opportunity-grabbing victims. The story is narrated by Skyler Rampike, brother of Bliss, the six-year-old ice skating prodigy who is murdered in the basement of their suburban New Jersey home. Before his sister was born, father Bix and mother Betsey had high hopes for Skyler; social climber Betsey even arranged play dates for Skyler with children of the wealthy. But that strategy failed, and when Bliss's skating career takes off, the elite begin returning Betsey's calls—and Skyler is shuffled into the background. As Betsey becomes immersed in Bliss's skating lessons, beauty treatments, and press appointments and Bix is freed to scramble up the corporate ladder, Skyler finds that his suffering is just beginning. After Bliss is murdered, he is sent off to special schools for children who have been traumatized with an alphabet soup of diagnosed syndromes and a pharmacopeia of medications. Meanwhile, Betsey writes a book about her experience and is soon the darling of talk-show hosts. Oates is in top form as she creates a narrative voice that is bitter and humorous yet sympathetic, building to a dramatic and satisfying resolution. Highly recommended.—Joshua Cohen, Mid-Hudson Lib. Syst., Poughkeepsie, NY

Oates revisits in fantastic fashion the JonBenet Ramsay murder, replacing the famous family with the Rampikes—father Bix, a bully and compulsive philanderer; mother Betsey, obsessed with making her daughter, Bliss, into a prize-winning figure skater; and son Skyler, the narrator of this tale of ambition, greed and tragedy. Skyler's voice—leaden with grief and guilt—is sometimes that of the nine-year-old he was when his sister was killed, and sometimes the teen he is now, 10 years later, when a letter from his dying mother "solves" the mystery of Bliss's death. The emotionally wrecked Rampike children are collateral damage in a vicious marital battle; Sky is shunted aside, while Bliss is ruthlessly manipulated. Stylistic tricks (direct-address footnotes chief among them) lighten Oates's razor-sharp satire of a privileged enclave where social-climbing neighbors dwell in gargantuan houses; as Oates's readers will expect, the novel is long, propelled at breakneck speed and apt to indulge in verbal excess (as in the 55-page novella within the novel). Oates's psychological acuity, however, ranks this novel as one of the best from a dark observer of our lives and times. (June)