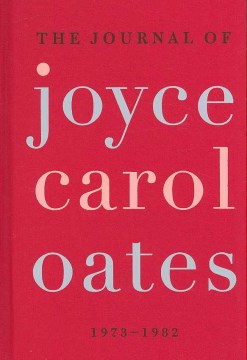 Already famous as a provocative, category-defying writer three decades ago, Oates began keeping a journal, which she referred to as "an experiment in consciousness," in the wake of a "mystical experience." Accordingly, the mysterious way stories and novels come to her is an underlying theme in this exceptionally lucid and affecting chronicle. Johnson, Oates' biographer (Invisible Writer, 1998), has edited with sensitivity entries from the now mammoth journal's first decade. Oates writes about her loving marriage to Raymond Smith, her heart condition, her passion for teaching, and the evolution of her writing process. In 1975, she notes that she wouldn't want to be known as prolific, already sensing the negative response to her volcanic creativity. Few living writers fascinate readers as Oates does, and this generous volume is rich in literary and personal revelations, including Oates' confession of her need to write about her family's hidden past, which culminated, 25 years later, in a tour de force, The Gravedigger's Daughter (2007). The line that best conveys the essence of this American master? "I feel so much." Copyright 2007 Booklist Reviews.

As if she weren't a prolific enough writer, Oates has been keeping a journal since 1973. Here are entries from the first decade. Copyright 2007 Reed Business Information.

In this first of presumably several volumes of her personal journals, Oates (The Falls ) has recorded her day-to-day activities, teaching experiences, meetings with friends, and, especially, thought processes as she works on her poems, short stories, or lengthy novels. She also discusses her interactions with other writers and her activities on several literary committees. Throughout the journal, several topics recur: her happiness in her marriage; her enjoyment of teaching; her initial uncertainty about how her long works will evolve, followed by periods of great production; and her frequent concern with the question of her public vs. private persona and the disconnect between how others view her and how she views herself. Not surprisingly, the volume is quite lengthy, but it is both well edited and fascinating, though best read at a leisurely pace. Highly recommended for academic and larger public libraries. [Packaged in a colored cloth case with embossed lettering.—Ed.]—Gina Kaiser, Univ. of the Sciences in Philadelphia

Writing is... a drug, sweet, irresistible, and exhausting," writes Oates in this fascinating and significant record of an artist's life. She was 34 when she began this "experiment in consciousness," which follows the gestation and writing of many of her most important works. Oates, readers come to realize, is intensely disciplined, exquisitely sensitive, unflaggingly—almost morbidly—introspective, concerned with philosophical issues, attuned to mysticism and acutely responsive to the natural world. Although she abhors being described as prolific, she writes daily, with feverish energy; she herself uses the word "obsessed." If a day or two passes when she isn't writing, she feels "profound worthlessness." Teaching, she reveals, is a vital component of her well-being, although it often leaves her exhausted. The journal records her relationships with contemporary authors, including Philip Roth, Susan Sontag, John Updike, Gail Godwin, Stanley Elkin, John Gardner and Donald Barthelme. She is candid about her "intensely" intimate marriage to Raymond Smith, her lack of maternal instinct and the hours she spends at the piano, an obsession almost equal to her writing. Overall, this journal immerses the reader in a complex, searching, imaginative personality—an artist who continues to refine her search for literary expression. 16 pages of b&w photos. (Oct. 2)

The book that changed my life: interviews with National Book Award winners and finalistsOsen, Diane, 1956-

Portraits and observations: the essays of Truman CapoteCapote, Truman, 1924-1984

The best American essays of the centuryOates, Joyce Carol, 1938-