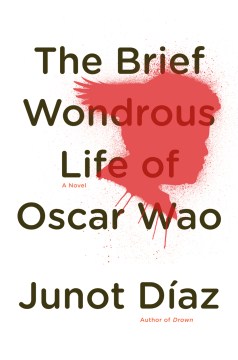 *Starred Review* Díaz's gutsy short story collection Drown (1996) made the young Dominican American a literary star. Readers who have had to wait a decade for his first novel are now spectacularly rewarded. Paralleling his own experiences growing up in the Dominican Republic and New Jersey, he has choreographed a family saga at once sanguinary and sexy that confronts the horrific brutality at loose during the reign of the dictator Trujillo. Díaz's besieged characters look to the supernatural for explanations and hope, from fukú, the curse unleashed when Europeans arrived on Hispaniola, to the forces dramatized in the works of science fiction and fantasy so beloved by the chubby ghetto nerd Oscar Wao, the brilliantly realized boy of conscience at the center of this whirlwind tale. Writing in a combustible mix of slang and lyricism, Díaz loops back and forth in time and place, generating sly and lascivious humor in counterpoint to tyranny and sorrow. And his characters—Oscar, the hopeless romantic; Lola, his no-nonsense sister; their heartbroken mother; and the irresistible homeboy narrator—cling to life with the magical strength of superheroes, yet how vibrantly human they are. Propelled by compassion, Díaz's novel is intrepid and radiant. Copyright 2007 Booklist Reviews.

Having caught everyone's attention with his short stories, D¡az offers a debut novel starring ghetto geek Oscar, whose family labors under a Fuk£ (or curse) that delivers prison, tragic accidents, and, worst of all, bad luck in love. With a national tour. Copyright 2007 Reed Business Information.

Areader might at first be surprised by how many chapters of a book entitled The Brief and Wondrous Life of Oscar Wao are devoted not to its sci fi–and–fantasy-gobbling nerd-hero but to his sister, his mother and his grandfather. However, Junot Diaz's dark and exuberant first novel makes a compelling case for the multiperspectival view of a life, wherein an individual cannot be known or understood in isolation from the history of his family and his nation.

Oscar being a first-generation Dominican-American, the nation in question is really two nations. And Dominicans in this novel being explicitly of mixed Tano, African and Spanish descent, the very ideas of nationhood and nationality are thoughtfully, subtly complicated. The various nationalities and generations are subtended by the recurring motif of fuk , "the Curse and Doom of the New World," whose "midwife and... victim" was a historical personage Diaz will only call the Admiral, in deference to the belief that uttering his name brings bad luck (hint: he arrived in the New World in 1492 and his initials are CC). By the prologue's end, it's clear that this story of one poor guy's cursed life will also be the story of how 500 years of historical and familial bad luck shape the destiny of its fat, sad, smart, lovable and short-lived protagonist.

The book's pervasive sense of doom is offset by a rich and playful prose that embodies its theme of multiple nations, cultures and languages, often shifting in a single sentence from English to Spanish, from Victorian formality to "Negropolitan" vernacular, from Homeric epithet to dirty bilingual insult. Even the presumed reader shape-shifts in the estimation of its in-your-face narrator, who addresses us variously as "folks," "you folks," "conspiracy-minded-fools," "Negro," "Nigger" and "plataneros." So while Diaz assumes in his reader the same considerable degree of multicultural erudition he himself possesses—offering no gloss on his many un-italicized Spanish words and expressions (thus beautifully dramatizing how linguistic borders, like national ones, are porous), or on his plethora of genre and canonical literary allusions—he does helpfully footnote aspects of Dominican history, especially those concerning the bloody 30-year reign of President Rafael Lenidas Trujillo.

The later Oscar chapters lack the linguistic brio of the others, and there are exposition-clogged passages that read like summaries of a longer narrative, but mostly this fierce, funny, tragic book is just what a reader would have hoped for in a novel by Junot Diaz.

Matthew Sharpe is the author of the novels Jamestown and The Sleeping Father. He teaches at Wesleyan University.

The feast of the GoatVargas Llosa, Mario, 1936-

Edwin Mullhouse: the life and death of an American writer, 1943-1954 by Jeffrey CartwrightMillhauser, Steven

The fortress of solitudeLethem, Jonathan

How the Garcia girls lost their accentsAlvarez, Julia