The god of animals : a novel / Aryn Kyle. 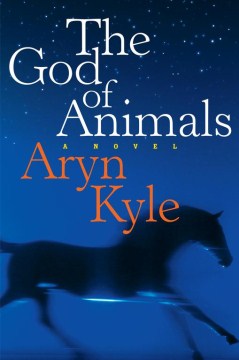 Sixth-grader Alice Winston is having a tough year. Her older sister dropped out of high school and ran off to marry a rodeo cowboy. Her father's horse ranch is teetering on the edge of solvency. Her depressed mother won't get out of bed. And her shop partner just drowned in a canal. Unprepared for the increasingly adult role she finds herself playing, Alice starts telling lies, and soon finds herself in a complicated relationship with her alienated English teacher. Though the powerful building of portents doesn't fully pay off in the end, this is a very impressive debut. Kyle's prose is graceful and mature, and her themes are subtly stitched into the story. Her portrayal of Desert Valley, Colorado, ravaged first by drought and then by rain, captures the isolation and hardship that can characterize western life and also the encroachment of those--the subdivision people--for whom the weather means nothing. A powerful tale, from a writer with real promise, of a girl coming of age amid a dying way of life. ((Reviewed November 15, 2006)) Copyright 2006 Booklist Reviews.

There's good word on this debut starring a 12-year-old girl intent on helping shore up her family's sagging Colorado ranch after her sister runs off with a cowboy. Copyright 2006 Reed Business Information.

Kyle's novel begins as adolescent narrator Alice Winston recounts the almost simultaneous departure of her sister, Nona, who elopes with a rodeo cowboy, and the drowning of Polly Cain, one of Alice's classmates. These events loom like specters over the rest of the novel, which brims with a confidence and assuredness atypical of a debut. In light of Nona's exodus, Alice becomes her father's primary assistant in tending the family's barn and her bedridden mother's intermediary to the outside world. Alice's penchant for prevaricationâ€"she makes a pretense of having been Polly Cain's best friendâ€"helps her repel this harsh reality. In Alice, Kyle has created an adolescent voice that is charming and authentic but that also has its irksome tics: surprising events always inspire such hyperbolic responses as "the air around me sucked to the rims of the earth" and "Everything was coming undoneâ€¦the entire world breaking into pieces beneath me." In the long run, though, this is a carp, as the voice exerts an irresistible pull. The prospect of other people leavingâ€"Alice's father with a woman he trainsâ€"and the revelation of characters' secrets keep the reader glued to the story. Highly recommended for all public libraries. [See Prepub Alert, LJ 11/1/06.]â€"David Doerrer, Library Journal

Horses and lost love propel this confident debut novel about Alice Winston, a 12-year-old loner with family troubles in Desert Valley, Colo. Her mother hasn't left her bed since Alice was a baby; her father struggles to keep their horse ranch solvent; and her beautiful older sister, Nona, has eloped with a rodeo cowboy. Alice resists befriending the rich girl who takes riding lessons from her father, becomes obsessed with a classmate who drowns in a nearby canal and entangles herself with adults whose motives are suspect. Kyle imbues her protagonist with a genuine adolescent voice, but for all its fluidity, her prose lacks punch, and too often, somber descriptions of Colorado's weather and landscape are called upon to underscore themes of human isolation, jealousy and pain ("Tomorrow, the sun would rise and deaden the land beneath its indifference"). The coupling of female adolescence with the stark West produces its share of harsh truths, though Kyle overstates the moral: love hurts, it's a dangerous world and the truth is hard to swallow. (Mar.)