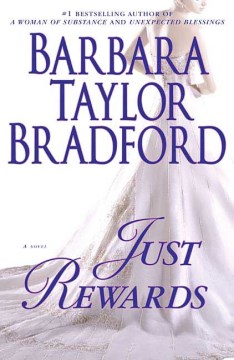 The descendents of Emma Harte (A Woman of Substance, 1979) continue to pursue love and matrimony in this newest chapter in the Harte family saga. Evan Hughes, who only recently discovered she was related to Emma, is pregnant with twins and all set to marry handsome Gideon Harte. Her cousin Linnet frets about the wedding when she hears that cousin Jonathan Ainsley, who loathes the rest of the family and causes trouble at every turn, is back in London. To make matters worse, Evan's family has arrived, and her adopted sister, Angharad, is still seething with envy over Evan's perfect life. Another cousin, India Standish, is also preparing for a wedding, but then her fiance's child from a past relationship is left in his care, bringing his troubled ex-girlfriend back into his life. Linnet's sister, Tessa, is trying to decide if she can give up her claim to the Harte's department stores to marry her French war correspondent boyfriend. When Jonathan Ainsley and Angharad team up, the entire clan fears the evil they might try to perpetrate together. Readers who have followed the trilogy that began with Emma's Secret (2004) and continued in Unexpected Blessings(2005) will be pleased with this romantic conclusion to the long-running saga. ((Reviewed November 1, 2005)) Copyright 2005 Booklist Reviews.

The final episode of the Harte family saga (which began with A Woman of Substance ) focuses on the travails of four of Emma Harte's great-granddaughters. Newlywed Linnet wants to modernize and lead the family business. Divorcée Tessa also wants to be at the helm of the empire, but she has some personal issues to confront first. Evan prepares to marry and give birth but is put in danger after an unexpected confrontation. India also plans a wedding but has to adapt when her fiancé's young daughter comes to live with them. Throw in some disgruntled people hellbent on wreaking havoc, and you have quite a soap opera! And thank goodness for the juicy storylines because this book suffers from astonishingly wooden dialog that bloats the otherwise readable text. Is this really the end? As always, Bradford kindly prefaces the book with genealogical information on the "Three Clans" (the Hartes, O'Neills, and Kallinskis), and summaries of past important events are woven throughout as necessary. But the number of characters to keep track of is staggering, and newbies may find it difficult to appreciate new developments while trying to make sense of old ones. Still, public libraries should stock up. [See Prepub Alert, LJ 9/15/05.]--Samantha Gust, Niagara Univ. Lib., NY

Can this be, as advertised, the final episode in the Harte family saga? A Woman of Substance (1979), the story of Emma Harte's triumph over poverty and illegitimacy to found England's greatest department store, and its four sequels were huge bestsellers. Now Emma's great-granddaughter, Linnet O'Neill, must defend the empire and family against evil uncle Jonathan Ainsley. But words such as "granddaughter" and "uncle" don't do justice to the complexities. It takes four and a half pages of front matter to enumerate the Harte, Kallinski and O'Neill clans whose intertwining lives drive the saga. Emma's descendants offer a helping hand to new in-laws--and the reader--by uttering sentences such as these: "Through his great-grandfather, Winston the First, Emma is Gideon's great-great-aunt. But she is also Gideon's great-grandmother, because Emma was my grandmother." Weddings and funerals keep the local caterer busy and offer crescendos of activity, if scant emotion. Although Ainsley's malevolence hovers behind the story and leads to near disasters, there's never a doubt that the strong women will triumph--though not without struggle. Series devotees will take heart at the ending, which hints that Ainsley's evil will survive his death and the struggles will continue offstage even if Bradford lays down her golden pen. (Jan.)