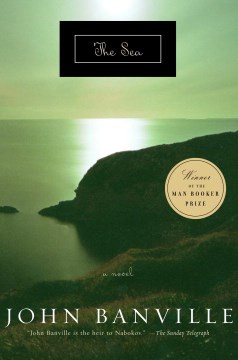 /*Starred Review*/ Winner of the 2005 Booker Prize for Fiction, Irishman Banville's new book does more than simply explore a life. It explores life. This splendidly profound and beautifully written novel offers lessons aplenty about how the shadow of the past does not necessarily cast darkness over the present but certainly leaves its imprint. That situation is true even in late middle age, as shown here, when Max, after losing his wife to cancer, answers an enigmatic (to himself) urge to return to the seaside resort that had been the site of summer vacations in his childhood. He wants especially to remember the "time of the gods": that summer in his adolescence when the Grace family was also in summer residence. In a monologue punctuated by exquisite metaphors borne on raw emotion, Max circles through time--through memory--to seek an understanding of not only that summer but also his subsequent adult life. Max's initial--and juvenile--passion for Mrs. Grace was, as the summer progressed, transferred to her daughter, Chloe, and almost as if prescribed by young Max's admission into the world of the "divinities," the season comes to involve a horrible tragedy. As Max's present-day retreat from real life back to the place where strong memories were made draws to a necessary close, it occurs to him that "the past . . . matters less than we pretend." In a word, this novel is brilliant. ((Reviewed November 15, 2005)) Copyright 2005 Booklist Reviews.

"I have carried the memory of that moment through a whole half century, as if it were the emblem of something final, precious and irretrievable," says the narrator of Banville's Booker Prize-winning novel of a relatively trivial moment. But when he recalls the mother and daughter whom he first loved as a barely pubescent child--whose presence pulled him out of the shadow of his paltry self--he observes, "The two figures in the scene, I mean Chloe and her mother, are all my own work." Memory, then, is the subject of this brief but magisterial work, a condensed teardrop of a novel that captures perfectly the essence of irretrievable longing. After the death of his wife, Max has retreated to the seashore where he spent his childhood summers, staying at an inn that was once the home of a magnificent, careless family called the Graces. It's as if reawakening the pain of his first, terrible loss--that high-strung and volatile Chloe--will ease his more recent loss. The novel is written in a complex, luminous prose that might strike some as occasionally overblown, and Chloe's final act didn't entirely persuade this reviewer. The result? A breathtaking but sometimes frustrating novel. Highly recommended.--Barbara Hoffert,Library Journal

Banville's magnificent new novel, which won this year's Man Booker Prize and is being rushed into print by Knopf, presents a man mourning his wife's recent death--and his blighted life. "The past beats inside me like a second heart," observes Max Morden early on, and his return to the seaside resort where he lost his innocence gradually yields the objects of his nostalgia. Max's thoughts glide swiftly between the events of his wife's final illness and the formative summer, 50 years past, when the Grace family--father, mother and twins Chloe and Myles--lived in a villa in the seaside town where Max and his quarreling parents rented a dismal "chalet." Banville seamlessly juxtaposes Max's youth and age, and each scene is rendered with the intense visual acuity of a photograph ("the mud shone blue as a new bruise"). As in all Banville novels, things are not what they seem. Max's cruelly capricious complicity in the sad history that unfolds, and the facts kept hidden from the reader until the shocking denouement, brilliantly dramatize the unpredictability of life and the incomprehensibility of death. Like the strange high tide that figures into Max's visions and remembrances, this novel sweeps the reader into the inexorable waxing and waning of life. (Nov. 8)

The child in timeMcEwan, Ian

The sense of an endingBarnes, Julian