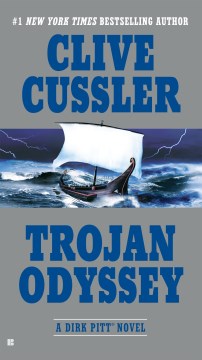 The latest Dirk Pitt thriller, like its 16 predecessors, is ready made for the big screen. (Let's hope it makes a better movie than 1980's Raise the Titanic, also based on a Pitt adventure, which gives you some idea of how long the series has been around.) A hurricane threatens an undersea resort hotel; meanwhile, Dirk Pitt's twin offspring are trapped at the bottom of the ocean in Pisces, an underwater laboratory. Oh, and Dirk himself swoops in to rescue the hotel, and its guests--but what about his children? Cussler has written a lot of seabound thrillers, and he clearly knows how to put one together to get maximum excitement from minimal material. Everything is done in shorthand, from the disaster-movie-plot setup to the characters and dialogue. There's the evil-named Specter, the man behind the hotel, "with a heart of cold stone." There are the twins, whose dialogue sounds like it was lifted from a Hardy Boys novel ("I want to take a closer look inside the cavern where I found the urn." "Can you find it in the dark?" "Like a fox to its lair"). In a nutshell, this novel offers precisely what readers have come to expect from a Dirk Pitt adventure: danger, heroics, villains, heroes. ((Reviewed November 1, 2003)) Copyright 2003 Booklist Reviews

Adventure tales for boys (and girls) of all ages have no more vigorous champion today than Cussler, who has kept the spirit of Joe and Frank Hardy alive, albeit on a grander scale, in numerous bestsellers. This 17th Dirk Pitt extravaganza finds Cussler (literally, as he makes a cameo at book's end) and his entourage of paint-by-number characters in fine fettle, foiling a dastardly plot by outlandish villains to launch a new ice age, and at the same time demonstrating that the Achaeans were not Greeks but Celts, and that Troy was a town in what's now England. After a prelude set during the Trojan War, the novel proper starts with a roar, as a monstrous hurricane sweeps toward the Caribbean, endangering not only Pitt's twin son and daughter, engaged in undersea exploration, but also the Ocean Wanderer, a luxury floating hotel owned by a mysterious billionaire known as Specter. In a manly manner, Pitt and his longtime sidekick, Al Giordino, both of NUMA (the National Underwater and Marine Agency), save the hotel and Pitt's grown kids, but not before those kids discover a trove of underwater relics that indicate that the Celts, aka Achaeans, reached the New World millennia ago. And the Celts are still here, in the guise of a female Druidic cult linked to Specter and aiming for world domination by altering ocean currents via a vast underground mechanism in Nicaragua, which will plunge the earth into cold, then selling a new type of cheap fuel cell to supply needed heat. The action never flags, the heroics never halt and the bodies pile up as Pitt and Co. take on the villains; some big changes in Pitt's personal life close the book. Cussler's legions of fans are going to march into bookstores the day this title appears; expect whopping sales. 750,000 first printing; $750,000 ad/promo. (Nov.) Copyright 2003 Reed Business Information.