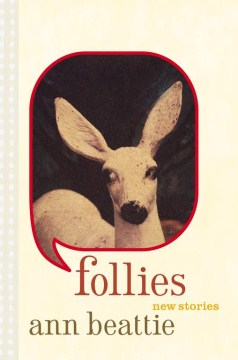 "Flechette Follies," the novella that opens Beattie's newest collection, is one of her most arresting and suspenseful tales. It begins with a fender bender in Charlottesville, and involves a special-ops agent, a nursing-home nurse, a missing-person quest in London, and a broken engagement in Southern California. As increasingly inexplicable and dismaying events unfold, Beattie's characters find themselves marooned on an island of misunderstandings as life crashes on, cruel and oblivious. In the nine masterfully crafted and unnerving stories that follow, Beattie displays her flair for dark comedy, her gift for writing dialogue as percussive as perfect tennis volleys, and her unwavering psychological acuity. Several searing yet cathartic stories portray exasperating and painful relationships between adults and their aging parents as Beattie, long the voice of the young, hip, and disaffected, proves herself also to be the bard of the resistant middle-aged and the addled elderly. Whatever the age of the character she invents, Beattie homes in on the perversity of emotion, the fallibility of instinct, and the relentless negotiations of the psyche. So in command is Beattie, she not only captures the absurdity of life but also brilliantly satirizes our effort to find coherence in its chaos. Simultaneously a shrewd observer of the particulars of the times and an oracle of the timeless nature of the human condition, Beattie is indispensable. ((Reviewed February 1, 2005)) Copyright 2005 Booklist Reviews.

Aging baby boomers as only Beattie can present them; with a three-city tour.Copyright 2005 Reed Business Information.

The characters that inhabit Beattie's short stories arrive on the page from around the corners, undetected by most people. Only a writer such as Beattie would notice them, clear down to the smallest detail. Beattie writes of alienation, of angst, of human connections that have been missed or lost or otherwise rendered incomplete. Her stories offer observations of the human condition not to teach, enlighten, illuminate, explain, or interpret. They just are. This is the author's eighth collection of stories, some having been previously published in periodicals. The largest piece, "Flechette Follies," takes a convoluted path as the life of the protagonist unravels just a bit. Unsettling? Yes. Interesting? Not sure. More substantive is the final story, "That Last Odd Day in L.A.," in which the author more fully engages the reader in one man's life-changing encounter with a deer. This is not Beattie's most important collection to date, but readers who enjoy short pieces of fiction such as those that are found within the pages of The New Yorker may want to take a look. Recommended for larger public and academic libraries. [See Prepub Alert, LJ 1/05.]-Susanne Wells, P.L. of Cincinnati and Hamilton Cty., OH Copyright 2005 Reed Business Information.

Odd but subtle coincidences, missed connections, strained familyrelations these are the major dynamics in Beattie's latestcollection of nine stories and a novella. In the latter,Flechette Follies, a random accident George Wissone rear-endsNancy Gregerson at a stoplight in Charlottesville, Va., sparks aconnection that affects far-flung people. Nancy's troubled sonis MIA in London, and she hires George (whom she correctlyguesses to be in the CIA) to track him down. When George himselfdisappears, it affects not only Nancy but also George'son-again, off-again girlfriend and others who join forces tolearn his fate. Beattie's stories of adult children attemptingto make sense of their aging parents and their own relationshipsare also compelling. In Find and Replace, a woman tries tocomprehend her mother's decision to suddenly move in withanother man following the death of her husband; The Rabbit Holeas Likely Explanation spools out the strained relations betweentwo siblings after their mother has a stroke. While a fewstories read more like extended vignettes, Beattie's trademarksare here: the careful language, the deft humor and the sad, slowsweetness of life winding its way on. Fans should be happy tofind that after all these years, this esteemed writer'scharacters can still be expected to muse over life's ironies andfind no easy conclusions. Agent, Lynn Nesbit. (May)Copyright 2005 Reed Business Information.

Make me do things: storiesRedel, Victoria

A spool of blue threadTyler, Anne

Once upon a time, there was youBerg, Elizabeth