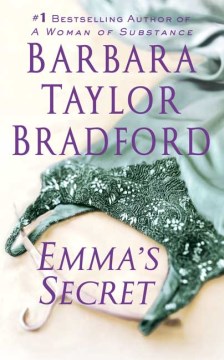 Emma Harte, the heroine of Bradford's novel A Woman of Substance (1979), has been dead for more than 30 years when Emma's Secret opens, but her past factors heavily into the events of the novel. At the bequest of her dying grandmother, young American Evan Hughes arrives at Emma's magnificent English clothing store, Hartes, only to find out that Emma has long since died. She is soon hired as a store assistant to Linnet O'Neill, Emma's great-granddaughter, who can't help but notice the American's resemblance to her own mother, Paula. Evan and Gideon Harte, Paula's cousin, fall in love amid whispers that Evan might be the descendant of one of Emma's husbands. The truth lies in Emma's diary, but Paula is reluctant to read it. Curiosity finally gets the better of her, and the journal takes Paula to Emma's life during World War II, and at least partially answers the family's questions about Evan's heritage. It is up to Paula to figure out the rest. Readers new to the series might have a hard time getting a handle on the large cast of characters and their relationships to each other, but those familiar with Emma Harte and her large family will feel right at home. ((Reviewed October 15, 2003)) Copyright 2003 Booklist Reviews

Public libraries should expect high demand for this long-awaited fourth installment in Bradford's Emma Harte saga (after A Woman of Substance, Hold the Dream, and To Be the Best), which also celebrates its 25th anniversary. Before American Evan Hughes's grandmother dies, she advises Evan to go to London in search of Emma, who holds the key to her future. Department store founder Emma has actually been dead for many years, but her legacy lives on through granddaughter Paula and competitive great-granddaughters Linnet and Tessa. While Tessa struggles with a shaky marriage, Evan is hired to help Linnet work on an 80-year fashion retrospective that spotlights Emma's couture. Several people are suspicious of Evan, who looks like Paula. Is she related somehow? What does she want? What was Emma's secret? Those who haven't read the previous books will get a crash course on the characters, while series fans will get a refresher. Because there are so many characters to keep straight, the genealogical information that precedes the text is essential. Although plagued by stilted dialog and passages that are sometimes too descriptive and long-winded, this book has plenty of drama, romance, and intrigue to keep readers interested. Bradford is already working on the next installment. [Previewed in Prepub Alert, LJ 9/15/03.]-Samantha J. Gust, Niagara Univ. Lib., NY Copyright 2003 Reed Business Information.

It has been nearly 25 years since Bradford made her name with the female rags-to-riches saga A Woman of Substance, the first in a trilogy of novels that concluded with 1988's To Be the Best. Gambling that there is still life to be squeezed out of the story of indomitable super-survivor Emma Harte and her descendants, Bradford returns to the chase with this present-day sequel. The novel opens in 2001 at Pennistone Royal, Emma's magnificent country estate in Yorkshire, now occupied by her granddaughter Paula's family. Paula heads the Knightsbridge store, flagship of the nationwide Harte chain, and her grown daughters, Linnet and Tessa, work there. A young American, Evan Hughes, with an uncanny Harte family resemblance, appears one day seeking a job. She's hired at once, since Linnet needs help with an upcoming fashion spectacular, a retrospective featuring Emma's couture wardrobe. Linnet's cousin Gideon, who works for the Harte newspapers, is smitten with Evan, and soon the mystery of her background is of concern, especially when it's discovered that Evan's grandmother had a close relationship with Emma. The overwhelming amount of descriptive detail clothing, interior decor, food and drink slows down the narrative, but such Victorian props as a decorative locked box, a key taped behind a photograph and long-lost diaries provide mild suspense. The saga was already losing steam with To Be the Best, and this fourth installment is further diluted. Lacking the dynamic impact of the original, it will be best appreciated by those with an irresistible desire to follow the further adventures of the Harte clan. (Jan. 6) Forecast: A substantial 25th-anniversary marketing campaign will help rope in old fans, though some may find the series has lost its luster. True stalwarts, however, will be pleased to hear that another entry is in the works. Copyright 2003 Reed Business Information.