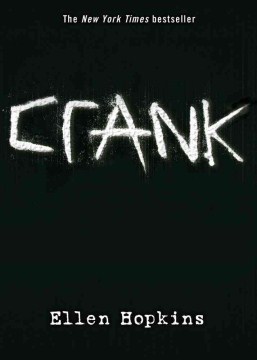 Gr. 8-12. Like the teenage crack user in the film Traffic, the young addict in this wrenching, cautionary debut lives in a comfortable, advantaged home with caring parents. Sixteen-year-old Kristina first tries crank, or crystal meth, while visiting her long-estranged father, a crank junkie. Bree is Kristina's imagined, bolder self, who flirts outrageously and gets high without remorse, and when Kristina returns to her mother and family in Reno, it's Bree who makes connections with edgy guys and other crank users that escalate into full-blown addiction and heartrending consequences. Hopkins tells Kristina's story in experimental verse. A few overreaching lines seem out of step with character voices: a boyfriend, for example, tells Kristina that he'd like to wait for sex until she is "free from dreams of yesterday." But Hopkins uses the spare, fragmented style to powerful effect, heightening the emotional impact of dialogues, inner monologues, and devastating scenes, including a brutal date rape. Readers won't soon forget smart, sardonic Kristina; her chilling descent into addiction; or the author's note, which references her own daughter's struggle with "the monster." ((Reviewed November 15, 2004)) Copyright 2004 Booklist Reviews.

Nonfiction author Hopkins pens her first novel, written in verse, introducing 15-year-old narrator Kristina, who reveals how she became addicted to crank, and how the stimulant turned her from straight-A student to drug dealer, and eventually a teen mom. On a court-ordered visit to see her slimy and long-absent dad, she meets-and is instantly attracted to-Adam, who sports a "tawny six pack,/ and a smile." Soon, Adam introduces her to "the monster" (there, she also unleashes a new personality, id-driven Bree). Her addiction grows, as does Bree's control. Readers get a vivid sense of the highs and lows involved with using crank ("I needed food, sleep,/ but the monster denied/ every bit of it"). Her life changes quickly: Soon she's dating two guys, both of whom use crank; says "Fuck you" to her mom, can't keep up with school, and loses her old friends. There are plenty of dramatic moments: The first time she does crank, for example, her dad joins her. That same night, she stumbles into a bad area and is almost raped, and Adam's girlfriend tries to kill herself. Later in the book, she does get raped and starts selling the drug for the Mexican Mafia. Readers will appreciate the creative use of form here (some poems, for instance, are written in two columns that can be read separately or together), and although the author is definitely on a mission, she creates a world nearly as consuming and disturbing as the titular drug. Ages 14-up. (Oct.) Copyright 2004 Reed Business Information.

Beneath a meth moonWoodson, Jacqueline

Gabi, a girl in piecesQuintero, Isabel