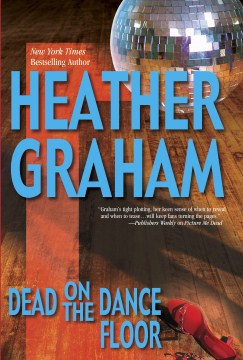 As the prolific romance veteran Graham has moved toward a genre-bending combination of romance and mystery, her audience (and her marketing support) has grown substantially. Here, although a decent love story unfolds, the mystery takes center stage when Lara, the premier ballroom dancer from the Moonlight Sonata dance studio, collapses and dies during a competition. Ex-cop Quinn O'Casey doesn't pay much attention to ballroom dancers, so he's a bit puzzled when his cop brother Doug asks him to help investigate Lara's death. It all becomes clear when Doug admits to being one of Lara's many lovers. Under extreme duress, the curmudgeonly Quinn leaves his beloved boat in the Keys and agrees to go undercover as a dance student at the studio. There is no shortage of suspects: the ex-husband who dates Lara's friends; the other dancers who were jealous of Lara's talent; the aging instructors who long to have their youth back. Although her plotting is entirely too predictable, Graham knows how to keep her narrative moving, and her characters are reasonably well developed. This makes fun, easy reading for fans of romances and "lite" thrillers. ((Reviewed March 15, 2004)) Copyright 2004 Booklist Reviews.

Prolific romance author Graham, with more than 90 novels to her credit, sets her new romantic suspense tale in the world of professional ballroom dance. At the Moonlight Sonata Dance Studio in Miami Beach, coaching for professional competitions is available, as is recreational dance instruction. When Lara Trudeau, imperious star professional, drops dead after a performance, authorities, citing a lethal combination of pills and alcohol, deem the death accidental. But patrolman Doug O'Casey, a new dance student and Lara's most recent lover, suspects foul play, as do some associates, including the studio manager, Shannon Mackay. Doug finally persuades his brother Quinn, a private investigator, to sign up for dance lessons so he can look into the case. Meanwhile, in the vicinity of the dance studio, several seemingly unrelated murders occur. Quinn begins to fall in love with his dance instructor, Shannon, although she could be the murderer he seeks-for that matter, so could his brother. When Shannon gets a cryptic message, "You're next!" she's determined to find the killer herself; her efforts put her in harm's way. The story isn't all suspicions and chills: readers can learn something about salsa, tango and waltz contests, and there's a touching bit about a homeless girl who's a natural dancer and finds a home. Graham's more suggestible fans will doubtless put on their dancing shoes and head for the nearest Arthur Murray studio. (Mar.) Copyright 2004 Reed Business Information.