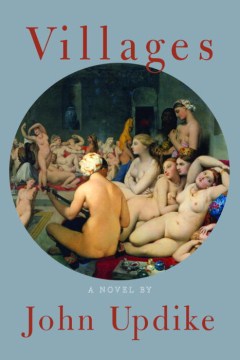 Seventy-year-old Owen Mackenzie does what people his age often do: he dwells on the past. For Owen, this means he obsessively recollects the places he's lived and how these locations functioned as settings for what the women in his life--his mother, two wives, and assorted lovers--gave him. He feels that these females are what provided life to his life, the material of his true existence, which, in this remembrance, he stretches like a canvas on the framework of the sequence of three villages he called home from childhood in the 1930s to late middle age in the present day. Born into poverty, Owen nevertheless considers himself lucky, which is essentially the point of--the catalyst for--this look back on an outwardly unextraordinary life. Interestingly, neither career nor fatherhood occupies his mind to much extent. As is usual for Updike, this novel is elegantly styled; however, it builds to a less than impressive whole. His lovely sentences are like intricate brickwork, but they ultimately do not add up to a real structure. Readers go with Owen down memory lane through all of his life moments without receiving any noticeable payoff, for his story fails to resonate on much more than a surface level. However, it is an Updike novel, so expect demand. ((Reviewed September 1, 2004)) Copyright 2004 Booklist Reviews.

Owen Mackenzie may be a software magnate, but as disclosed in this 21st novel by Updike, his life bears many parallels to that of his creator. With a 60,000-copy first printing. Copyright 2004 Reed Business Information.

Updike returns with his 21st novel, breathing life into one man's journey from childhood to old age. Born in 1933, Owen Mackenzie is a young man sheltered in shady suburban New England villages. Following his education at MIT, where he meets his first wife, Phyllis, Owen begins a business in computer software and raises his family in the cozy enclosure of village life. But like Updike's signature character, Rabbit Angstrom (Rabbit, Run), Owen finds himself fleeing the constriction of his responsibilities. Women define Owen-they nurture, confound, and entice him-and he measures his worth as a man through his sexual awakenings and mounting extramarital affairs. The central question here is one of sex-how American communities here, sanction, and demonize sex over time and how our childhood preconceptions shape how we enter into our sexual roles as adults. Owen is the quintessential American man, fumbling forward in life yet equipped with the confident belief in a charmed existence. Updike again proves that he is a preeminent writer with a sharp eye for human nature. For all collections. [See Prepub Alert, LJ 6/1/04.]-Misha Stone, Seattle P.L. Copyright 2004 Reed Business Information.

In this 21st novel by one of the premier chroniclers of American life, a man recalls a lifetime spent in New England communities of women. Owen Mackenzie, now in his 70s and living in the small village of Haskell's Crossing, Conn., with his second wife, Julia, spends his days immersed in the daily routines of retirement while reminiscing about his childhood town of Willow, Pa., and the village where he spent his adulthood, Middle Falls, Conn. Though Owen studied at MIT and founded an early computer startup that made him moderately rich, his story is primarily defined by his romantic relationships. He marries his first wife, Phyllis, a classmate at MIT, for her cool beauty, but later decides that he needs a broader range of sexual experience. After a fraught first affair, he learns caution and is able to clandestinely indulge his love of women, until Julia, a minister's wife, comes along and convinces him to embark on a messy divorce and remarriage that indirectly results in Phyllis's accidental death. Owen's obsession with women's bodies and blithe ignorance of their inner lives can sometimes read like a tedious parody of Updike's earlier work, without a sense of humor to imply the author is in on the joke. Yet Updike still writes lovely sentences and creates a believable portrait of the American village, concealing dark secrets but providing a limited stability. 60,000 first printing; BOMC selection. (Oct. 24) Copyright 2004 Reed Business Information.

Our souls at nightHaruf, Kent