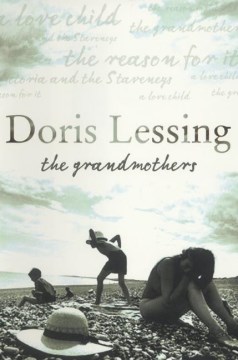 After more than 50 years as a great writer, Lessing continues to break new ground with this exciting collection of four short novels about intimacy among family, friends, and lovers. In the daring title story, two close girlfriends marry good men and raise their children together; then each woman has a passionate affair with the other's son. The sons eventually get married, but what chance do their wives have? In "Victoria and the Staveneys," a poor black child longs for a room of her own, and a liberal, rich white family does help her; but it's her child, Mary, who will find space in the middle class--if her mom can let her go. "A Love Child" tells a rare World War II story of bored troops stuck in India (they joined up to fight Hitler, why are they defending the British Empire?) and about one soldier haunted forever by his brief, secret, passionate affair. Except for "The Grandmothers," the stories go on too long. You can't wait to find out what happens, and you wish Lessing would get on with it. But then beautiful individual sentences stop you with their startling insight about experience usually hidden in silence. Yes, Lessing needs editing, but that was even true of her unforgettable classic The Golden Notebook (1962). ((Reviewed November 15, 2003)) Copyright 2003 Booklist Reviews

It would be difficult to say which is the best story in this collection of novellas, because each is studiously crafted and vastly different from the others. "The Grandmothers" depicts two middle-aged best friends who fall in love with each other's son. "Victoria and the Staveneys" is the tale of a mixed-race child troubled by the class differences that are a part of her heritage. In "The Reason for It," the decline of a glorious culture is explained by one of its leaders, and in "A Love Child," an ex-soldier longs to know the child he is sure he fathered on a brief reprieve from the horrors of World War II. Lessing, the virtuoso author of The Golden Notebook and many other works, is at the top of her game. These novellas are richly written if a bit dark; the characters struggle through difficult circumstances not of their own making, and their options are not always that good. Nonetheless, this is a brilliantly written book, and it is heartily recommended for most libraries. [Previewed in Prepub Alert, LJ 9/15/03.]-Amy Ford, St. Mary's Cty. Memorial Lib., Lexington Park, MD Copyright 2003 Reed Business Information.

The latest by the prolific Lessing is a collection of four novellas that vary considerably in quality, with the best of them, "Victoria and the Staveneys" and "A Love Child," showing her at the top of her very impressive form. They are both at once intimately detailed yet infinitely expansive in their suggestions of a lost world only recoverable by a profoundly observant writer. In "Victoria" a young London black woman of charm and great fortitude survives and transcends the hardest of all assimilations: acceptance by a free-thinking, liberal white family. The shades of racial and social subtext here are evoked with a sure hand that even a Zadie Smith could envy. "A Love Child" powerfully evokes a strange aspect of a familiar time: a terrible ocean voyage, during WWII, by a hapless British regiment sent to the Far East to help protect India against Japanese invasion. James Reid, a young conscript, puts ashore in South Africa in the course of this nightmare voyage and embarks on a liaison that transforms the rest of his life. The detail and almost hallucinatory power with which an era and an ethos are recaptured are Lessing at her best, comparable to Ian McEwan's amazing war scenes in Atonement. The other stories are on a much lower level. The title story is about an odd relationship between two older women and each other's young sons; it is an original idea, but curiously lame in the telling. And "The Reason for It" is one of those peculiar tales in the SF/fantasy genre that Lessing does well enough, but that never seem to be quite her métier. Still, the two prize pieces here are well worth the price. (Jan. 9) Forecast: Fans of the writer will be amply rewarded by the better half of the book, her best work in some years. Copyright 2003 Reed Business Information.

Death of the black-haired girlStone, Robert, 1937-

Living in the weather of the world: storiesBausch, Richard, 1945-

Married love: and other storiesHadley, Tessa