Ignorance / Milan Kundera ; translated from the French by Linda Asher. 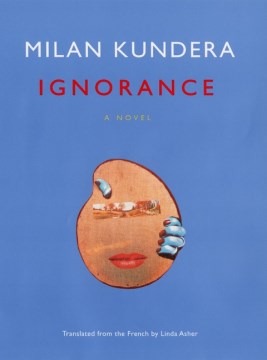 /*Starred Review*/ Can we ever really go home? As in his previous work, particularly The Book of Laughter and Forgetting (1981) and Laughable Loves (1974), Franco-Czech author Kundera uses the most basic human encounters to ask the largest questions about what is really shared between people, what links our former and present selves, how languages change who we are, and the meaning of nostalgia and homeland. After nearly 20 years in Paris and after the fall of Czech communism, Irena considers moving back to her native country and returns for a visit. In the airport, she meets Josef, also an immigrant, with whom she shared a single evening years ago in Prague. Irena remembers their initial meeting with detailed intensity and has always regretted its abrupt, chaste conclusion. Josef doesn't even recognize Irena, but he lies and a passionate climax follows. Using the brilliant framework of this and other confused affairs, Kundera explores the contorted nature of memory and an emigre's "great return," weaving in examples of Odysseus and the yearning of Holocaust survivors. Part intellectual postulating, part exquisite storytelling, Kundera's profound, unsettling, and expertly crafted novel examines the ultimate immigration--leaving behind what's inherited--and marvels at the power and impossibility of it. ((Reviewed September 1, 2002)) Copyright 2002 Booklist Reviews

Kundera's current language is French, but his sensibility remains in Prague, where this story is set. Former lovers return home to a newly liberated country and try to pick up the pieces. Copyright 2002 Cahners Business Information.

Further exploring the definition and possibility of nostalgia, as well as such title-worthy themes as forgetting, lightness, and identity, Kundera's latest novel (and the best of the three he has written in French) follows two middle-aged Czech émigrés who return briefly and somewhat reluctantly to their homeland in the months following the fall of communism. After several strong opening passages written in Kundera's typical blend of narrative and authorial meditation (and reminiscent of the more exciting pages of The Unbearable Lightness of Being and Immortality), Irena finds herself en route to Prague when she meets the similarly homebound Josef, with whom she'd nearly had an affair 20 years before. Irena's excitement and Josef's pretense of remembering her set up an ironic "Grand Return," rendered with compassion and humor, that features unpleasant memories, disappointment, sex born of desperation, and painful disconnections between the emigres and those they left behind. Though slightly thicker than Kundera's previous French offerings and hinting at the pre-Slowness fiction that won him a rabid following, Ignorance suffers from a seemingly hurried narrative whose end may produce in some fans a nostalgia for Kundera at his deepest and most playful. Recommended for libraries where Slowness and Identity were popular. [Previewed in Prepub Alert, LJ 6/15/02.]-Christopher Tinney, Brooklyn Copyright 2002 Cahners Business Information.

"Would an Odyssey even be conceivable today? Is the epic of return pertinent to our own time? When Odysseus woke on Ithaca's shore that morning, could he have listened in ecstasy to the music of the Great Return if the old olive trees had been felled and he recognized nothing around him?" Kundera (The Unbearable Lightness of Being) continues to perfect his amalgam of Nietzschean aphorism and erotic tale-telling in this story of disappointing homecomings. The time is 1989 and the Communists have fallen in Prague. In the Paris airport, Irena, a Czech emigre, recognizes an ex-compatriot, Josef. More than 20 years ago, Josef almost seduced Irena in a Prague bar; the two chat and agree to meet again in Prague. Each is returning for a different reason. Irena, in 1968, fled the country with Martin, her husband, to escape the political pressure he was under. Martin is long dead, their children are grown and Irena is now being pressured to return to Prague by her Swedish lover, Gustaf, who has set up an office in the city. Josef, a veterinarian, also left the country after the Russian invasion, out of disgust. He is returning to the Czech Republic to fulfill a request from his recently deceased wife. Both discover new and annoying aspects of Prague (such as Kafka T-shirts) as well as old bitterness. When they meet, Josef neglects to tell Irena one fact: he doesn't really remember her. With elegant detachment and measured passion, Kundera once again shows himself the master of both the erudite and the carnal in this Mozartian interlude. (Oct. 4) Forecast: Kundera's succession of novels with one-word titles (Identity; Slowness; Immortality), all originally written in French, have drawn a more mixed reception from critics than his earlier novels written in Czech. This novel will probably be no exception-and will likely match the previous three in sales-but the consistency and quality of Kundera's output is matched by few contemporary writers. Copyright 2002 Cahners Business Information.