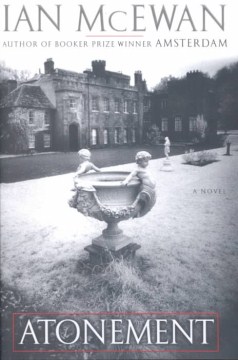 McEwan, a master of psychologically acute and elegantly gothic tales, won the Booker Prize for Amsterdam (1998) and now weighs in with an even more polished and entrancing novel. It's 1935, and England is experiencing a heat wave, while chaos rules at the Tallis country estate. Mr. Tallis is always at the office; his lovely wife, suffering from migraines, is usually in her darkened bedroom. Their youngest, 13-year-old Briony, a budding writer, keeps busy composing silly romances while waiting for her visiting older siblings and displaced cousins. Brother Leon, a bank clerk, arrives with an unattractive but wealthy friend. Sister Cecilia is home after finishing up at Cambridge, as is the sharp and ambitious Robbie Turner, their cleaning lady's son. The cousins, freckly twin boys and the newly nubile and wholly untrustworthy Lola, are unhappy victims of an impending divorce. All are hoping for a soothing holiday, but things quickly turn bizarrely catastrophic thanks to the highly imaginative but utterly naive and histrionic Briony, who sees something sinister occur between Cecilia and Robbie and wildly overreacts. McEwan's instantly addictive story line is of the bad-to-worse variety as he moves on to the harrowing vicissitudes of World War II. Every lustrously rendered, commanding scene is charged with both despair and diabolical wit, and McEwan's Jamesian prose covers the emotional spectrum from searing eroticism to toxic guilt. In sum, he excels brilliantly at depicting moral dilemmas and stressed minds in action without losing a keen sense of the body's terrible fragility, the touching absurdity of desire, and time's obstinacy. ((Reviewed November 15, 2001)) Copyright 2001 Booklist Reviews

McEwan typically writes scathing little fables, but this book sounds almost sagalike: it sweeps from prewar Britain to Dunkirk to a family reunion in 1999, propelled by a dark moment when three children lost their innocence. Copyright 2001 Cahners Business Information.

The major events of Booker Prize winner McEwan's new novel occur one day in the summer of 1935. Briony Tallis, a precocious 13-year-old with an overactive imagination, witnesses an incident between Cecilia, her older sister, and Robbie Turner, son of the Tallis family's charwoman. Already startled by the sexual overtones of what she has seen, she is completely shocked that evening when she surreptitiously reads a suggestive note Robbie has mistakenly sent Cecilia. It then becomes easy for her to believe that the shadowy figure who assaults her cousin Lola late that night is Robbie. Briony's testimony sends Robbie to prison and, through an early release, into the army on the eve of World War II. Gradually understanding what she has done, Briony seeks atonement first through a career in nursing and then through writing, with the novel itself framed as a literary confession it has taken her a lifetime to write. Moving deftly between styles, this is a compelling exploration of guilt and the struggle for forgiveness. Recommended for most public libraries. [Previewed in Prepub Alert, LJ 11/1/01.] Lawrence Rungren, Merrimack Valley Lib. Consortium, Andover, MA Copyright 2001 Cahners Business Information.

This haunting novel, which just failed to win the Booker this year, is at once McEwan at his most closely observed and psychologically penetrating, and his most sweeping and expansive. It is in effect two, or even three, books in one, all masterfully crafted. The first part ushers us into a domestic crisis that becomes a crime story centered around an event that changes the lives of half a dozen people in an upper-middle-class country home on a hot English summer's day in 1935. Young Briony Tallis, a hyperimaginative 13-year-old who sees her older sister, Cecilia, mysteriously involved with their neighbor Robbie Turner, a fellow Cambridge student subsidized by the Tallis family, points a finger at Robbie when her young cousin is assaulted in the grounds that night; on her testimony alone, Robbie is jailed. The second part of the book moves forward five years to focus on Robbie, now freed and part of the British Army that was cornered and eventually evacuated by a fleet of small boats at Dunkirk during the early days of WWII. This is an astonishingly imagined fresco that bares the full anguish of what Britain in later years came to see as a kind of victory. In the third part, Briony becomes a nurse amid wonderfully observed scenes of London as the nation mobilizes. No, she doesn't have Robbie as a patient, but she begins to come to terms with what she has done and offers to make amends to him and Cecilia, now together as lovers. In an ironic epilogue that is yet another coup de the tre, McEwan offers Briony as an elderly novelist today, revisiting her past in fact and fancy and contributing a moving windup to the sustained flight of a deeply novelistic imagination. With each book McEwan ranges wider, and his powers have never been more fully in evidence than here. Author tour. (Mar. 19) Forecast: McEwan's work has been building a strong literary readership, and the brilliantly evoked prewar and wartime scenes here should extend that; expect strong results from handselling to the faithful. The cover photo of a stately English home nicely establishes the novel's atmosphere Copyright 2001 Cahners Business Information.

My dear I wanted to tell youYoung, Louisa

A god in ruinsAtkinson, Kate