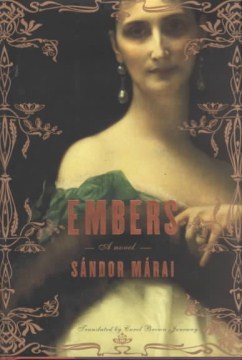 Most of this 1942 Hungarian novel, debuting in English in this edition, is a conversation between the General and Konrad, fast friends from military-school days until some 24 years later, when, after a day's hunt together and an evening's dinner with the General's wife, Krisztina, Konrad resigned his commission and left for the tropics. Since then, Krisztina has died, Konrad has taken British citizenship and resides in London, and the General has retreated to live in the room of his castle in which he was born. Their colloquy marks the first time the friends have met in 41 years. It is more the General's monologue than a conversation, and the wronged man--for Konrad and Krisztina had been meeting secretly--expounds on the fateful events long ago and the characters of their three principal actors in minute detail. Finally, he asks two questions that Konrad declines to answer. The General's performance is either the height of romantic nobility or proof positive that the aristocracy was too full of itself to survive modernity. ((Reviewed September 15, 2001)) Copyright 2001 Booklist Reviews

Published in 1942, as Europe lay dying, this novel was lost until recently, even as its author fled to the United States and eventually committed suicide in 1989. The entire novel is a conversation between two old friends but carries the tautness and reckless power of a half-dozen action novels. Earlier in the 20th century, as the old general prowls around his crumbling castle, he is surprised by a message that he will be visited by his old friend Konrad, whom he has not seen for 41 years. The two had been in military school together, and though Konrad was much poorer and of a distinctly unmilitary temperament, the two bonded instantly. But something terrible has happened to separate them something that clearly involves the general's wife, Krisztina and as the general talks and talks to his ever more reluctant guest, the secret is delicately revealed. Of course, it does involve a daring love between Konrad and Krisztina, but that is not really what is at stake, as Márai imaginatively reveals. Questions of honor, truth, and friendship are entertained here, and though the novel inevitably has an old-fashioned feel, the questions it raises are timeless. Highly recommended. [Previewed in Prepub Alert, LJ 5/1/01.] Barbara Hoffert, "Library Journal" Copyright 2001 Cahners Business Information.

Two very old men Konrad and Henrik, "the General" once the closest of friends, meet in 1940 in the fading splendor of the General's Hungarian castle, after being separated for 41 years, to ponder the events that divided them. This 1942 novel by a forgotten Hungarian novelist, rediscovered and lucidly and beautifully translated, is a brilliant and engrossing tapestry of friendship and betrayal, set against a backdrop of prewar splendor. In the flickering glow and shadow of candlelight, the General recalls the past with neither violence nor mawkish sentiment, but with restrained passion. The two met as boys, Henrik the confident scion of a wealthy, aristocratic family, and Konrad the sensitive son of an impoverished baron. Of their closeness, the General says, "the eros of friendship has no need of the body." When they are young men, Konrad introduces Henrik to Krisztina, the remarkable daughter of a crippled musician. Henrik and Krisztina marry, and the two keep up a close friendship with Konrad, until one morning, on a hunt, Henrik senses that Konrad is about to fire at him. Nothing happens, but Konrad leaves at once, vanishing. For the first time, the General goes to his friend's rooms, and then his wife unexpectedly comes in. He never speaks to her again. Capturing the glamour of the fin de siècle era, as well as its bitter aftermath, Márai eloquently explores the tight and twisted bonds of friendship. (Oct. 2) Forecast: Márai's history he was born in 1900, rose to fame in Hungary in the 1930s, fled the country after WWII and committed suicide in San Diego in 1989, virtually forgotten is at least as compelling as the story he tells here. Embers has already been published to much acclaim in Europe 250,000 copies sold in Italy and 230,000 copies in Germany and is licensed in 18 countries around the world. Feature coverage is to be expected, and though sales may be less explosive on these shores, Knopf's plan to translate future works by Márai should encourage a reappraisal of the writer's place in literary history. Copyright 2001 Cahners Business Information.