Playing with light : a novel / by Beatriz Rivera. 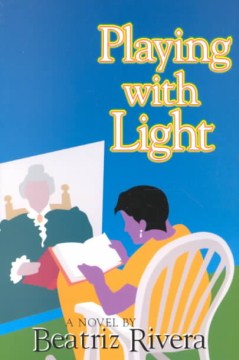 What seems at first a straightforward story of Cuban American women in contemporary Miami becomes a fanciful blurring of life, art, and time. As Becky Atkins (born Rebecca Barrios) decides to start a reading group in her Miami home, Umberto Barrios is reading aloud to the women who work at a Havana dressmaking factory in the 1870s, from a novel set in the future in Miami. Rebecca selects as her group's book Playing with Light, a novel based on fact about an eccentric family running a Havana dressmaking factory in the 1870s. The act of reading drives this tale, as the two groups become more and more immersed in each others' stories, in prose that is often playful and lusty, spiced with Spanish. Rivera works in Cuban history and reflects on the circumscribed role of women, who break society's bonds by changing gender, going mad, or committing suicide. This novel may be slow to captivate, but it becomes increasingly rewarding with further reading and reflection. --Michele Leber Copyright 2000 Booklist Reviews

Fans of the Cuban-born Rivera's Midnight Sandwiches at the Mariposa Express will be delighted with her latest novel. Set alternately in contemporary Miami and Havana a century ago, the story interweaves the lives and fates of several generations of women. Using the idea of a tertulia a women's gathering Rivera captures the energy and confusion of dozens of voices talking at once. She also catches the essence of the frustration and restlessness that briefly pulls a group of Cuban American women together for a reading group and ultimately pushes them apart again. As the Miami women wish for the passions found in a story of 19th-century Havana, their fictional counterparts dream of the bright future world of Miami. Jealousy, revolution, resignation, and hope leap between the centuries, bringing no new answers but still changing lives. Recommended for fiction collections of all libraries. Jan Blodgett, Davidson Coll. Lib., NC Copyright 2000 Cahners Business Information.

Havana-born Rivera author of the well-received Midnight Sandwiches at the Mariposa Express reaffirms her reputation with this innovative allegory on the pitfalls of human vice and the redemptive power of literature. The story takes place in two settings one in present-day, upper-class Miami, where Rebecca Atkins, née Barrios, decides to start a book discussion circle with several women friends (a character from Rivera's previous novel makes an appearance here), and one in the past, in historical 19th-century Cuba among the wealthy Santa Cruz family, factory owners in the lucrative garment industry and their toiling workers. The various Cubans immerse themselves in books as a means, depending on their circumstances, of transformation, amusement or escape from harsh realities. The expertly handled twist is that the historical characters are reading the story of the Miami characters and vice versa. Eventually, the two worlds collide, leaving the reader dazzled by the implications. This clever device allows Rivera to present sharp social satire and expose a variety of ethical issues ranging from slavery and exploitation of workers, to sexism, adultery, eating disorders and the destructive search for bodily perfection. Unraveling and exploring the parallels among the sets of characters adds an entertaining dimension to the narrative. As the characters endeavor to reconstruct themselves (changing names, dieting and bingeing, etc.), Rivera also makes an incisive statement about the constructed realities and projections of authors and readers. At times, Rivera tries too hard to reinforce links to time and identity, bombarding readers with heavy-handed clues; at other times she succeeds by introducing chapters with intriguing quotes from literary and political figures. An inventive, provocative oddity, this is a tantalizing work that draws readers into an engrossing twilight world. (Sept.) Copyright 2000 Cahners Business Information.