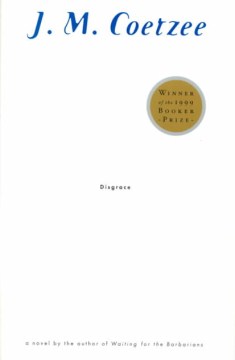 In Waiting for the Barbarians (1980) and other great novels, the eminent South African writer Coetzee set his dark stories in a chaotic near-future world on the edge of allegory. The place in this book is postapartheid South Africa; the power struggle is now; anarchy has come. This deeply pessimistic view is how many conservatives today see the changes in South Africa. David Lurie, 52-year-old divorced literary scholar, is disgraced for sexually harassing one of his college students. Refusing to submit to "counseling," he loses his job (he was never much of a teacher, anyway) and moves in with his beloved daughter Lucy on her small farm in the eastern Cape. She's a sturdy peasant, part of the new world ("dogs and a gun; bread in the oven and a crop in the earth") and he's glad for her--until one night the farm is ransacked, the animals killed, and Lucy gang-raped. The predators will come back, but she refuses to leave ("They see me as owing something"). In the end, she will bear the child from that rape, become the third wife of her former sharecropper, and live on his land. With the social chaos is Lurie's sense of personal failure. Is he also a monster? What about his own sexual aggression? Where is power now? There's an ongoing metaphor about the poet Byron's life and work that becomes tedious and self-indulgent--just too much about an idle old man "at the end of roving." Like Lurie, Coetzee clearly sees himself as apolitical, a weary figure "from the margins of history," but the insistence on violence as the only possibility makes the novel disappointing. What's strongest in the story, as good as anything Coetzee has ever written, are the scenes in the country place, especially the father-daughter relationship (both tender and apart). This novel has just won the prestigious Booker Prize in England, making Coetzee the first writer ever to win the prize twice. ((Reviewed November 15, 1999)) Copyright 2000 Booklist Reviews

Middle-aged professor David Lurie shuffles numbly through the shifting landscape of postapartheid South Africa. After he gets fired for sleeping with one of his students--and refusing to express remorse--Lurie finds shelter with his grown daughter and is exposed to a social reality that threatens more than his own sense of security. Winner of the Booker Prize, Coetzee's eighth novel employs spare, compelling prose to explore subtly the stuttering steps one man takes in a new world. (LJ 12/99) Copyright 2000 Cahners Business Information.

The "disgrace" of the title belongs to David Lurie, a white, middle-aged professor at Cape Technical University in South Africa whose tenure at the school includes a light class load and heavy liaisons with coeds. His latest affair ends badly when the girl's parents and boyfriend pressure the administration to fire him. He concedes guilt but not remorse and withdraws to his daughter Lucy's farm. David admires Lucy's independence but worries about her living alone in the country. When three black thugs known to Lucy attack the farm, raping her and injuring David, his fears are confirmed. Coetzee devotes much of the story to David's attempt to understand the attack and Lucy's refusal to leave the farm. This novel is never less than compelling owing to his gift for placing multifaceted characters in convincing dilemmas. As flawed as David and Lucy may be, readers will want them to overcome their trials. This also provides much food for thought on the concepts of ownership, victimization, and compassion. Highly recommended. [Previewed in Prepub Alert, LJ 10/15/99; this book was bumped from February 2000 to November 1999 after winning this year's Booker Prize.]--Marc A. Kloszewski, Indiana Free Lib., PA Copyright 1999 Cahners Business Information.

As a writer, Coetzee is a literary cascade, with a steady output of fiction and criticism (literary and social) over the last two decades. This latest book, his first novel in five years, is a searing evocation of post-apartheid South Africa; it earned him an unprecedented second Booker Prize. An uninspired teacher and twice divorced, David Lurie is a 52-year-old poetry scholar-cum-"adjunct professor of communications" at Cape Technical University. Spooked by the flicker of twilight in his life trajectory, he sees himself as an aged Lothario soon to be "shuddered over" by the pretty girls he has so often wooed; he is disappointed in and unengaged by the academy he now serves by rote; and he cannot locate the notes for his opera, Byron in Italy, in which he has placed so much reluctant hope. He is, even at his best, a man of "moderated bliss." So when he seduces Melanie Isaacs, a lithe student from his poetry elective ("She does not resist. All she does is avert herself"), he believes her to represent the final object of his desire, his last act of lush, Romantic desperation. And then he is found out. This not uncommon outrage earns him a dismissal and censure from the university committee he refuses to cooperate with in hopes of saving his job. He immediately shoves off for Salem in the Eastern Cape where his daughter, Lucy, manages a dog kennel and works her smallholding, harvesting a modest crop. Here David hopes to cleanse himself with time-honored toil. But his new life in the country offers scarce refuge. Instead, he is flummoxed to discover an unfamiliar Lucy-principled, land-devoted, with a heroic resignation to the social and political developments of modern South Africa. He also memorably encounters Petrus, Lucy's ambitious colored neighbor and sometime assistant. Petrus embodies the shifting, tangled vicissitudes of a new national schematic, and forces David to relate to the broad segment of society previously shrouded by the mists of his self-absorption. But a violent attack on the estate irrevocably alters how the book's central figure perceives many things: his daughter and her bewildering (to him) courage, the rights of South Africa's grossly aggrieved majority, the souls of the damaged dogs he helps put down at the local Animal Welfare League and even the character of Lord Byron's mistress and the heroine of his operatic "chamber-play." But this is no tale of hard-earned, satisfying transformation. It is, rather, a paean to willfulness, an aria on the theme of secca, or the drying up of "the source of everything." In Coetzee's tale, not a single note is false; every sentence is perfectly calibrated and essential. Every passage questions the arbitrary division between the "major and minor" and the long-accepted injustices propped up by nothing so much as time. The book somehow manages to speak of little but interiority and still insinuate peripheries of things it doesn't touch. Somber and crystalline, it "has the right mix of timelessness and decay." It is about the harsh cleansing of humiliation and the regretfulness of knowing things: "I lack the lyrical. I manage love too well. Even when I burn I don't sing, if you understand me." To perceive is to understand in this beautifully spare, necessary novel. First serial to the New Yorker. (Nov.) FYI: Viking accelerated the pub date after the Booker Prize was announced on October 25. Copyright 1999 Cahners Business Information.

My year of rest and relaxationMoshfegh, Ottessa