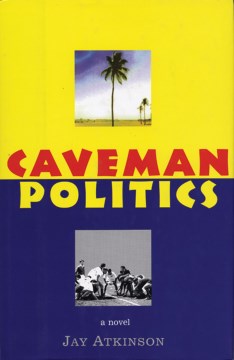 This one grows on you the way athlete's foot might grow on the rugby-playing journalist hero, Joe Dolan. At the outset, the book seems a kind of artless tale of arrested development in Cocoa Beach, Florida. Dolan and his teammates are beer-swilling, womanizing delinquents--contemporary cavemen. But Atkinson piles on events and characters of depth and substance until the reader appreciates the antic cast and the imperfect world they crash through. When a black rugger is accused of rape by a white woman, Dolan stumbles into some quick-and-dirty dealing in the local court system. At the same time, he's wrestling with the need to grow up, actually put his real writing talent to better use, and find romantic commitment that lasts longer than one night. His journey is made even more memorable by wonderful encounters with some heroically deranged people, including a schizophrenic Elvis impersonator with true star quality and a bizarrely life-affirming ex-paratrooper who normal people would say has a death wish. ((Reviewed March 1, 1997)) Copyright 2000 Booklist Reviews

This rewarding first novel is the story of a reluctant hero who may have taken longer than most to grow up but is finally getting there. Reporter Joe Dodge spends his free time playing rugby, boozing with teammates, and pursuing women. "Not giving a shit is my biggest asset," he jokes (but it isn't a joke). When a black teammate, Mike Melendez, is charged with raping a white woman, no one much cares. The police and public are content to let him rot in prison. Though Joe hasn't been friendly with Mike off the playing field, he sets out to help him. Other plot lines weave around this central core, e.g., Joe's growth as a reporter and his discovery of a performer who not only looks and sounds like Elvis but believes he is Elvis. All in all, Atkinson has written a jauntily unpretentious, solidly plotted book that displays good insights into character. Joe is a hero you can care about, and he is surrounded by a cast of often zany but always interesting characters. Highly recommended.?David Keymer, California State Univ., Stanislaus Copyright 1997 Cahners Business Information.

The blind dedication of an unforgettable cadre of ragtag, itinerant Cocoa Beach, Fla., jocks is transformed into a transcendent metaphor for life in this moving first novel. Convinced that his black teammate, Mike Melendez, a talented 27-year-old Trinidadian art student, has been falsely accused of raping the white girlfriend of a redneck biker, amateur rugby star Joe Dolan, a reporter for the Cocoa Beach Post-Gazette, seeks justice. Joe gets ensnarled with a slimy DA who is manipulating the judicial system for political gain. While vindicating Melendez, noble Joe also rescues a similarly innocent victim of the DA's plottings, a vagabond singer who believes he's Elvis. Unable to free himself from his internal demons, however, Joe hides behind his obsession with winning the Florida rugby championship and his impressive list of sexual conquests, avoiding his own bigotry and his considerable gifts as a writer. Ultimately, he loses a relationship with a woman he truly loves. Atkinson builds real suspense around Joe's inability to let go of his childhood pain and make a serious commitment. As probing as it is engaging, this tale keeps readers hoping that Joe can one day grow beyond the prison of his own Peter Pan slogan, "The horror of nonexistence meant nothing when you were dancing under the Florida sun." (Apr.) Copyright 1998 Publishers Weekly Reviews

The art of fieldingHarbach, Chad

Fighting in the shadeWatson, Sterling