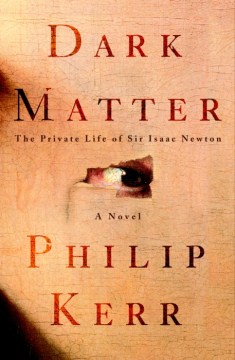 /*Starred Review*/ It's tempting to dismiss Kerr's latest historical mystery as nothing more than a Sherlock Holmes adventure in Newtonian drag. One of the seventeenth century's greatest minds, Isaac Newton, is appointed warden of the Royal Mint during England's Great Recoinage. Aided by educated yet slow-witted sidekick and narrator Christopher Ellis, Newton employs the scientific method and logical deduction to thwart a high-reaching conspiracy to murder thousands of Catholics, pass counterfeit guineas, and reignite the war with France. "You seem to know everything without the need to be told of it first," failed lawyer Ellis exclaims midway through the tale. Replies Newton, "It's no trick. Merely observation. . . . That is enough." Holmesian similarities aside, Dark Matter turns out to be an illuminating, often crackling exploration into the mysteries of science, mathematics, religion, and human nature-- played out in the dark shadows of the Tower of London and on the city's even meaner streets. Kerr's mastery of period detail makes the story all the more delicious, as does the fact that Newton really did hold a post at the Royal Mint, where, with the help of a clerk named Christopher Ellis, the author of Optics and Principia Mathematica tracked down counterfeiters with the ruthless dedication of Eliot Ness. This isn't as multilayered as Iain Pears' Instance of the Fingerpost (1998), but it is considerably more accessible and covers much of the same thematic ground. ((Reviewed August 2002)) Copyright 2002 Booklist Reviews

The latest historical figure to serve as sleuth is Sir Isaac Newton, who must uncover a gang of counterfeiters with the help of hotheaded young Christopher Ellis. Copyright 2002 Cahners Business Information.

There have been many mysteries featuring famous historical figures as protagonists, among them Elliot Roosevelt's crime-solving First Lady Eleanor Roosevelt, Stephanie Barron's investigative Jane Austen, and Karen Harper's sleuthing Queen Elizabeth I. Now comes Sir Isaac Newton and his assistant, Christopher Ellis (also an actual person). It is 1696 in London, and Ellis has been hired to help Newton in his job as Warden of the Royal Mint. Ordered by the king to find and prosecute counterfeiters whose false coins threaten the war-shaken British economy, the two men get more than they bargained for when they uncover a much more dangerous conspiracy. Plot devices such as secret coded documents, the pseudoscience of alchemy, and a string of strange murders make for an exciting read. Using as backdrop the Tower of London, the Royal Mint, Bedlam madhouse, and Newgate Prison, the ever-versatile Kerr, author of sophisticated science-based thrillers like The Second Angel and Esau, weaves a rich tapestry of interesting characters and period details. Highly recommended. [Previewed in Prepub Alert, LJ 6/15/02.] Fred Gervat, Concordia Coll. Lib., Bronxville, NY

Holmes and Watson provide the template for this very satisfying historical thriller from Kerr (The Grid, etc.), with Sir Isaac Newton acting as great detective and one Christopher Ellis serving as narrator. It's 1696, and a series of murders are plaguing the Tower of London, where the middle-aged Newton has recently assumed (as in real life) the position of warden of the royal mint, with the younger Ellis (again as in real life) serving as his assistant. Like Holmes, the cold and cerebral Newton relies on rationalism the scientific method to solve the crimes, while Ellis, quick with sword, pistol and temper, brings the emotional counterweight provided by Conan Doyle's Watson. The murders are accompanied by esoteric clues, most notably encrypted messages and alchemical references, that spur Newton to their resolution as forcefully as does his intense sense of duty, for the killings seem to involve not only a plot to disrupt a recoinage necessary to continue England's war with France, but also a conspiracy to commit religious genocide against a backdrop of incessant tensions between Catholics and Protestants. The mystery elements of the novel provide a sturdy spine for the book's main flesh: its robust recreation of life at the end of the 17th century. Ellis's fluid narration sets the tone, illuminating a London beset by pestilence, poverty, whores and ruffians, noblemen grave or foppish, opium dens, brothels and grisly executions, and a bright array of historical figures including, in the role of blackguard, Daniel Defoe. There's an erotic/romantic subplot involving Ellis and Newton's niece, but the main focus is on the two leads. Both are well drawn, though Newton, ostensibly the novel's center, is less compelling than Ellis's full-blooded youth. That disparity, and an overly complex plot, are the drawbacks of what is, withal, a most gripping and well-appointed entertainment. (Oct. 1) Copyright 2002 Cahners Business Information.

The sweet smell of decay: being the first chronicle of Harry LytleLawrence, Paul, 1963-