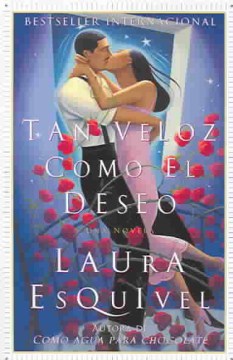 Esquivel, the award-winning author of the best-selling Like Water for Chocolate (1993), weaves a similarly enchanting and sensuous tale in her latest novel. The book actually is a loving tribute to the author's father and tells the story of Jubilo, a child born with a smile on his face (he was delivered while his mother was laughing at a joke) and a talent for discerning the secrets that exist in people's hearts. As a young boy, acting as an interpreter between his Mayan grandmother and his Spanish-speaking mother, he uses his unique skills to soften their bitter words, so that they eventually come to love one another. Eventually, Jubilo marries a woman with whom he is madly and passionately in love, takes a job as a telegraph operator, and uses his gift to help others by rewriting the messages they send by telegraph. Most of the story is told in flashbacks, from Jubilo's deathbed, where he lies blind and mute, estranged from his beloved wife. It is only when his daughter, Lluvia, purchases a telegraph machine at an antique store that he can finally communicate with his family and reveal the secrets that tore apart his marriage, including the tragic death of a son no one knew about. Fans of Esquivel, and there are many, will definitely enjoy this beautifully written story done in her trademark magical and bittersweet style. ((Reviewed June 1 & 15, 2001)) Copyright 2001 Booklist Reviews

Esquivel unearths the tragic secrets of an estranged couple as the husband lies dying. Written as a tribute to her father; look for the Spanish-language edition from Anchor. Copyright 2001 Cahners Business Information.

Once again, Mexican novelist Esquivel mixes together an unexpected blend of ingredients, in this case Mayan and Aztec numerology, communication technologies (from telegraphs to computers), and human passions, to tell the story of one Mexican family during the 20th century. Jubilo, a master of all forms of communication whose mind is itself a sophisticated cryptographic machine, is a proud descendant of Mayans. Lucha, his passionate and beautiful wife, is upper class and well educated. Lluvia, their daughter, is born in the midst of divorce proceedings following an unspeakable family tragedy, but eventually she, too, demonstrates her father's gift for the reconciling powers of communication. Any new novel by Esquivel will be compared to her incomparable first novel, Like Water for Chocolate. This one is quite as full of passion, fascinating cultural history, and endearing characters and will be enjoyed by her many fans. Recommended for most libraries. [Previewed in Prepub Alert, LJ 5/1/01.] Mary Margaret Benson, Linfield Coll. Lib., McMinnville, OR Copyright 2001 Cahners Business Information.

The princess of modern Latin literature (second only to Isabel Allende) has written yet another quirky and sensual story with a moralistic twist, its cute-as-can-be characters arguing and loving with equal passion. But Esquivel's fourth novel lacks that certain something that enthralled readers of Like Water for Chocolate. Her writing is choppy, cliché-laden and has the feel of a translation (no translator is credited). Yet it invokes chuckles and sighs, and if a reader craves more of the sweet wackiness that made the author's first book so appealing, Swift As Desire certainly delivers. Since birth, Júbilo has had a zest for life and an uncanny ability to hear the words in people's hearts before they are able to (or just didn't want to) say them. He puts his talents to good use as a telegraph operator in 1920s Mexico and falls in love with beautiful, wealthy Luz. The couple marries, has children and enjoys a heavenly existence. But something happens during their idyllic life together that drives them apart. Now, their daughter Lluvia is nursing her father as he is bedridden with Parkinson's disease. Before Júbilo dies, Lluvia desperately wants to know the cause of her parents' separation. Through Morse code, she communicates with her father and uncovers the secret nothing juicy, just a sad story that could have been avoided if the lines of communication between husband and wife had been more open. Esquivel's storytelling abilities are in top form here, and, despite its unoriginality, the novel succeeds in conveying a touching message of the power of familial and romantic love. (Sept.) Copyright 1999 Cahners Business Information.