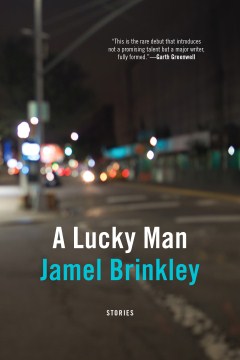 *Starred Review* In nine perceptive stories about broken families, loners, and social outcasts in search of redemption, Brinkley's stunning debut depicts urban life in all its lonely, wearying detail. Set in Brooklyn and the Bronx, in poor neighborhoods and on school campuses, these tales are imbued with pathos, sexuality, and moments of violence and tenderness. In the title story, a private school security guard secretly snaps photos of young women in public and wonders if his wife has left him for good. In "I Happy Am," a boy attending a Catholic day camp shares an unlikely bond with a suburban woman, even though she's not the wealthy blonde he anticipated. "No More Than a Bubble" follows two college friends who crash a Brooklyn house party, where the girls they pursue teach them a lesson in hard-to-get. The former inmate in "A Family" stalks his deceased friend's son and widow until an unexpected encounter reveals his intentions and complicated history. These characters may be hanging on by frayed threads, but they are very much alive and not so much guarded against whatever hardships may befall them as, rather, looking for a lucky break and welcoming chance with open arms. With this memorable collection, Brinkley emerges as a gifted and empathetic new writer. Copyright 2018 Booklist Reviews.

In this debut collection, chosen as an Indies Introduce Winter/Spring 2018 title by the American Booksellers Association, men and boys struggle with privilege, desire, responsibility, and family history.

Brinkley's first collection portrays young African American men struggling with fathers, brothers, and friends, present or absent. What impresses first is the length and strength, the sheer weightiness of each detailed and meditative story. Brinkley doesn't flick off moments but shows how each contains multitudes. In "No More Than a Bubble," ostensibly about two friends picking up girls at a party, the narrator says, "Sometimes I feel all I'd have to offer, other than questions, are my memories of that time in Brooklyn." As he recalls his father's effort to teach him about happiness, he can't enjoy the sex he's having because he's trying to manage the situation; later, he recognizes the sudden rupture with his friend as something repeated throughout his life. Elsewhere, a boy who thinks of himself as a robot—the better to block his feelings—endures a troublesome trip to the suburbs, and a teenager striving for manhood is caught between his desire for a wild night out and his concern for a damaged younger brother he sometimes scorns. Fully developed stories that readers will savor.

The nine stories in Brinkley's promising debut address persistent issues of race, class, and masculinity across three decades of New York City's history, from Manhattan's corporatization in the mid-'90s to the outer boroughs' gentrification today. In "No More Than a Bubble," two black Columbia undergrads crash a very white house party in Brooklyn, where they pair off with two older women with confounding, less-than-successful results. An imaginative young man finds his expectations of upper-middle-class life dashed during a day trip to the suburbs in "I Happy Am," while a former convict reconnects with a dead buddy's girlfriend in "A Family." "A Lucky Man" and "Clifton's Place" are the collection's two most successful stories, conveying the particular sadness of older African-Americans left adrift by market forces and "revitalization." Other entries, in plot and in prose, can feel too polite and mannered to register as memorable, nodding toward a stylistic exuberance and transgressive edge that never fully appear. Nonetheless, Brinkley's stories offer penetrating perspectives and stirring tragedies.

How are you going to save yourselfHolmes, J. M. (Jeff M.)