Once upon a river : a novel / Bonnie Jo Campbell. 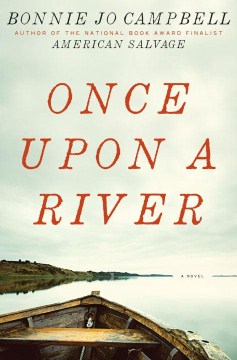 *Starred Review* Margo Crane, 16, is called Sprite, River Nymph, a throwback, and a river princess. Beautiful, strong, and quiet, she is a hunter and a sharpshooter. Abandoned by her self-indulgent mother, she turns to her extended family across the Stark River in rural Michigan, but her uncle Cal is rapaciously lustful, and things turn violent. Margo steals Cal's fancy rifle, grabs her sacred text, a kid's book about her idol, Annie Oakley, and takes off in her grandfather's teak boat. And so begins a dramatic and rhapsodic American odyssey, a female Huckleberry Finn, a wild-child-to-caring-woman story as intricately meshed with the natural life of the river as a myth. Margo first appeared in Campbell's debut book, Women and Other Animals (1999), and Campbell, a National Book Award finalist for American Salvage (2009), knows her protagonist so well that she conveys all that Margo does, thinks, and feels with transfixing, sensuous precision, from the jolt of a gun to the muscle burn of rowing a boat against the current to the weight of a man. From killing and skinning game to falling in with outlaws and finding refuge with kind if irascible strangers, Margo's earthy education and the profound complexities of her timeless dilemmas are exquisitely rendered and mesmerizingly suspenseful. A glorious novel, destined to entrance and provoke. HIGH-DEMAND BACKSTORY: National Book Award and NBCC finalist Campbell is on a trajectory to best-seller status with this powerful novel. Copyright 2011 Booklist Reviews.

Last year, when Campbell's American Salvage was both a National Book Award and a National Book Critics Circle finalist, readers woke up to a tremendous young talent. Campbell's new novel features 16-year-old Margo Crane, a crack shot who flees by river after being implicated in her father's death. She's always loved the river, but, as one can imagine, actually living on the water is an entirely different thing. Set in rural Michigan, this book will surely vivify a side of American culture we don't often see. It also shows us how a turn in one direction can sometimes mean never going back. Excellent for book clubs, so it's good that there will be a guide and a concerted effort to pitch both clubs and libraries; an eight-city tour.

This second novel by National Book Award finalist Campbell (American Salvage) is set in Murrayville, a rural Michigan town far removed from the modern world. Inhabitants have lived off the Stark River for generations, including 16-year-old Margo Crane's family. She's been taught the best fishing spots and knows the hidden dangers downstream from the Murray Metal Fabricating Plant. Her carefree existence ends when her mother, a depressed alcoholic, leaves town, and Margo is raped by her uncle Cal. Margo's unique revenge leads to her father's death, a tragic event that nevertheless sets her free from being at the mercy of the Murrays. Equipped with ammunition, food, her father's ashes, and a pink envelope with her mother's return address, she takes her father's boat downstream, determined to find her mother. Margo survives by hunting, fishing, and garden pilfering and by distrusting people. Her river odyssey ultimately leads to self-preservation on her terms. VERDICT A truthful and deeply human story that pulls us in and won't let go. Readers looking for superior fiction are in for an uplifting, first-rate story. [See Prepub Alert, 1/10/11.]—Donna Bettencourt, Mesa Cty. P.L., Grand Junction, CO

Campbell's novel-character-rich, detailed, and with a strong sense of place-achieves both a crisp, graceful lyricism and a gripping pace-a combination that should please many readers. It should also please Strayed fans who are willing to step away from hikes, memoirs, and narrative nonfiction for an excursion into fiction. Campbell (American Salvage) tells the story of Margo Crane, a teenager who, in the mid-1970s, sets off on her own quest, leaving behind her broken family and finding something close to peace. Abandoned by her mother, raped by her uncle, and dealing with her own inadvertent role in her father's death, Margo takes to Michigan's Stark River in her family's boat. She is guided by a scrap of paper containing her mother's address and a sense of connection to, and belief in, Annie Oakley, whom she has read about in books. Her journey is about survival and self-discovery, the bonds of family, and following the path that unfolds before her. And when it comes to walking paths, the wounded but intrepid Margo makes a remarkable companion. - "RA Crossroads" LJ Reviews 5/3/12 (c) Copyright 2011. Library Journals LLC, a wholly owned subsidiary of Media Source, Inc. No redistribution permitted.

In her follow-up to National Book Award finalist American Salvage, Campbell trains her unflinching eye on Margo Crane, a down-on-her-luck 16-year-old living in late 1970s rural Michigan who is, in rapid succession, abandoned by her mother, raped by her uncle, and witness to the shooting death of her father. An accomplished marksman who worships Annie Oakley, Margo takes off, traveling up the Stark River and struggling to survive on her own, having been once again rejected by her mother. Encountering a progression of strangers, both kind and otherwise, Margo is a modern-day pioneer whose steely resolve is matched only by her guarded need for tenderness. Forced to kill a man in a moment of panic, Margo must learn to forgive those who have hurt her in order to forge a new and better life for herself. Working against the backdrop of a beautiful but unforgiving landscape, Campbell juxtaposes spare prose with lush details in this stark chronicle of hardship and splendor, friendship and disappointment, and families undone and reunited, and though the novel occasionally flags under the crushing burden of Margo's unremitting ill fortune, it is, finally, a fine and sobering story with more than a little Winter's Bone–style grit in it. (July)