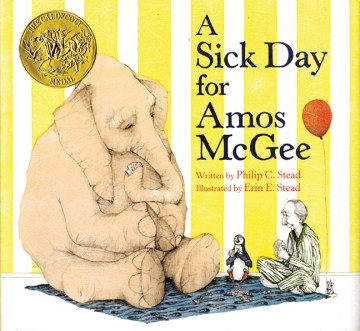 Zookeeper Amos McGee always makes time to visit his good friends at work: he plays chess with the elephant, runs races with the tortoise (who always wins), sits quietly with the penguin, lends a handkerchief to the rhinoceros (who has a runny nose), and reads stories to the owl (who is afraid of the dark). Then, after Amos gets a cold, his friends miss him, and they leave the zoo and ride the bus to his place to care for him and cheer him up. Like the story, the quiet pictures, rendered in pencil and woodblock color prints, are both tender and hilarious. Each scene captures the drama of Amos and the creatures caring for each other, whether the elephant is contemplating his chess moves, his huge behind perched on a stool; or the rhinoceros is lending Amos a handkerchief; or the owl is reading them all a bedtime story. The extension of the familiar pet-bonding theme will have great appeal, especially in the final images of the wild creatures snuggled up with Amos in his cozy home. Copyright 2010 Booklist Reviews.

Every day kindly zookeeper Amos McGee plays chess with the elephant, keeps the penguin company, reads stories to the owl, etc. When Amos stays home one day, his friends have just the right medicine: they make time to visit their good friend. The attentively detailed pencil and woodblock illustrations reveal character and enhance the cozy mood of the gentle text. Copyright 2010 Horn Book Guide Reviews.

Kindly zookeeper Amos McGee is a creature of habit, much like his animal charges. Every day Amos follows the same morning routine; and when he gets to work, he "always [makes] time to visit his good friends." Amos has a special relationship with each one of his pals: he plays chess with the thoughtful elephant, races the tortoise "who never ever lost," quietly keeps the shy penguin company, has a handkerchief ready for the runny-nosed rhino, and reads stories to the owl "who was afraid of the dark." Erin Stead's attentively detailed pencil and woodblock illustrations reveal character and enhance the cozy mood of Philip Stead's gentle text. Wiry, elderly Amos has a kindly Mister Rogers air about him; the animals, while realistically rendered overall, display distinct personalities without uttering a word. When Amos stays home one day to nurse a cold, his friends have just the right medicine: they make time to visit their good friend. Two wordless spreads showing the animals (and one peripatetic red balloon) taking the bus to Amos's house have an almost surreal quality, which adds some low-key anticipation to the understated story. Copyright 2010 Horn Book Magazine Reviews.

With quiet affection, this husband-and-wife team tells the story of a zookeeper whose devotion is repaid when he falls ill. On most days, the angular, elderly Amos rides the bus to the zoo, plays chess with the elephant ("who thought and thought before making a move"), sits quietly with the penguin, and spends time with his other animal friends. But when Amos catches a cold, the animals ride the bus to pay him a visit, each, in a charming turnabout, doing for Amos whatever he usually does for them. The elephant sets up the chessboard; the shy penguin sits on the bed, "keeping Amos's feet warm." Newcomer Erin Stead's elegant woodblock prints, breathtaking in their delicacy, contribute to the story's tranquility and draw subtle elements to viewers' attention: the grain of the woodblocks themselves, Amos's handsome peacock feather coverlet. Every face--Amos's as well as the animals'--brims with personality. Philip Stead's (Creamed Tuna Fish and Peas on Toast) narrative moves with deliberate speed, dreaming up a joyous life for the sort of man likely to be passed on the street without a thought. Ages 2–6. (June)

Animal strike at the zoo, it's true!Wilson, Karma